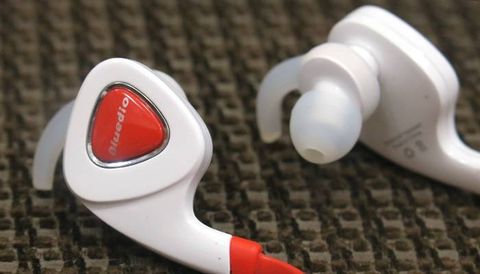 The Q5 is not for audiophiles, but it does check all the right boxes for a good sports headset.

It's not easy to find a good Bluetooth sports headset. The units either end up being too big, or have an additional control box dangling, making the headset feel heavier than it should. If not that, then they do cost a pretty penny. Bluedio Q5 seems to not have any of these issues.

To begin with it looks great. The headset earpiece itself is a little bigger than what you'd be used to, but the in-ear speaker unit is ergonomically tilted to fit cozily into the ear canal. The rubber cushioning comes in three sizes to fit all ears and also a set of T-light ear tips that are meant to prevent the earphones from falling during workout. I didn't particularly feel the need to add that though, as the headset managed to stay put in our tests to the point where I didn't even feel the unit in my ear after a while, which is always a sign of good design.

The two earphones are connected by a flat rubber cable, with no additional control box. Everything you need is right there in the right earpiece. There's a USB charging port on top, volume control at the back and the action button right on on the outside. It's all quite easy to reach and can be used while on a jog as well.

Before we move on, here are the specs for the Bluedio Q5:

The first thing you'll notice about the Bluedio Q5 is that it's quite bass heavy. That's a good thing when you're working out and need something peppy, but if you're using these as your primary headphones, it will not be the best option for all forms of music. The heavy bass does well with hip-hop, pop and certain forms of EDM, but when you're listening to something a bit purer like jazz, that's where you notice the shortcomings. The overall sound is a bit flat with the mids being a bit on the higher side.

While all that can easily be fixed with equaliser settings in your music player, it's still not the best options for slow ballads, jazz, or classical. Is that a bad thing? Not at all, considering there's not much of a crowd that will listen to those forms of music while working out to begin with. Moreover, there are very few Bluetooth earphones out there that do justice to minute sound notes.

Using the headphones as a handsfree unit for your phone works pretty well. Considering that the speaker is based in the earphone unit itself, your voice will sound muddled with ambient noise. That said, your voice will still be audible as long as you're not in a noisy or excessively windy environment.

As you can see in the specs, Bluedio claims a seven-hour listening time per charge, which seems about right. In fact I counted a little over seven hours (more like seven and a half hours), while using the headset for a mix of music and phone calls. I coudn't test the standby time by itself, but the 220 hours mentioned may just be accurate, as I could leave the headphones around for days and still find enough charge to go around.

The Bluedio Q5 looks great as a sports headset, and features just about everything you're looking for in that category. Even in performance, it's no slouch either - delivering good quality audio for just about all popular music categories. Is it perfect? Not really. But it's still one of the best sports Bluetooth headset you can get for Rs 1,899.

Buy it now on Amazon.in