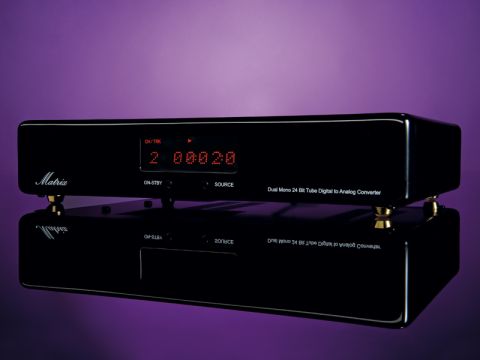 This DAC doesn't have the same extension in the bass as a good, solid-state alternative, but it does have plenty of weight

Sometimes a product comes along that manages to create a buzz without any fanfare whatsoever and the Synthesis Matrix DAC, from a relatively unknown Italian company, has done just that.

In fact, Synthesis doesn't even feature the Matrix DAC on its website, so full credit must go to UK distributor Audio Images, for this cunning bit of stealth marketing.

Synthesis, not to be confused with Audio Synthesis of passive preamp fame, makes a system's worth of electronics and speakers and finishes it in some very Italian colours. It's clearly into the sound of valves, so it's no surprise to see two pairs lying horizontally under a vent in the top of the unit, but how they fit the transformers into such a slim box is something of a mystery.

The answer lies in the fact that Synthesis employs low-profile transformers. And, as this isn't a power amplifier, it doesn't need something beefy to help it drive loudspeakers.

The tube complement under the lid consists of two 12AX7WA triodes and a pair of Philbrick K2-W op-amps. This is the first time we've encountered a valve op-amp and this is an example of the first op-amp ever produced.

It was introduced in 1952 and production ceased in 1971, so this is a new old stock (NOS) component. Op-amps are the building blocks of most low-power audio circuits. They're compact amplifiers that are usually in chip form and are a lot cheaper to use than discrete circuits.

The Matrix is a compact and beautifully finished convertor with four S/PDIF inputs for optical or electrical signals, the fifth input is a USB B socket for use with PC sources.

The digital to analogue converter that beats at the heart of this black box is a Wolfson WM8740 – an upsampling 24-bit/192kHz type. In fact there are two DACs – one for each channel, which means that this convertor could be run in balanced mode if it makers so desired.

As it stands, however, it is a single-ended component with only single-ended RCA phono outputs. In use it has an on/off button that says standby but actually kills the thing dead (something you will want to do if you pay the electricity bill because it sure runs hot).

The other button selects between inputs, which you will need to do if you have multiple digital sources as the DAC stays with the last input selected rather than automatically finding the live source.

The Matrix has been built with plenty of attention to detail; the casework is very well finished and the socketry is of a standard that one expects at this price. The display is large and clear if a little idiosyncratic; hooked up to a DVD-A player outputting a 96kHz signal the DAC indicates that the incoming bitstream is actually at 99kHz.

Less impressive, though, is the fact that we struggled to get our Macbook laptop to see the Matrix as a USB device whatever switch-on procedure was employed.

The competition in the valve DAC arena includes a number of models from Audio Note UK which has the DAC2.1x for £2,340, this is a non-oversampling type with transformer interfaces and a zero-feedback output in a chunky metal chassis.

It's not as pretty as the Matrix and doesn't have a display, but is likely to have offer greater transparency and dynamics.

Coming to the Matrix after a solid state CD player you can't help but hear its classic valve qualities. It's that bit smoother, warmer and richer than a transistor device and that does wonders for the timbre of instruments and voices.

The latter, in particular, sound fabulous and convey considerable intimacy thanks to the way the DAC seeks out nuances and phrasing so well. This extends to making lyrics easier to understand in more intense passages and it revels in the character of every line.

This DAC doesn't have the same extension in the bass as a good, solid-state alternative, but it does have plenty of weight and plays a mean tune in the lower octaves. It's also excellent at delivering the attack of a snare drum or electric guitar, Synthesis also manages to avoid undue softness in the sound and with a good recording it achieves results that are simply captivating.

With lesser recordings its clean and smooth top end is very forgiving, It doesn't quite deliver the full openness and dynamics that the best valve stages can produce, but this makes it easier to live with because you don't hear the shortcomings of noisy recordings.

Having said that, the Matrix transforms the sound of most mid-priced CD players. We used it with a Cambridge 840C, which sounds a little too 'warts and all' through highly revealing speakers, but works a treat with this DAC.

It's a beguiling piece of kit that does a superb job with timbre and avoids the valve pitfalls of sounding vague and overblown. It images well and has a decent sense of timing. It's a pity our sample didn't work with a PC because we suspect that its qualities would suit such a source rather nicely.

This Italian DAC has a lot to commend it, not least its fluency and the way it brings singers into the room.