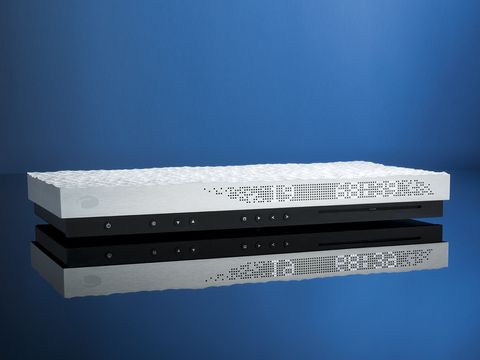 Resolution Audio's Opus 21 has been a reference CD player for us since it's introduction at the turn of the century. This diminutive two-box unit gives more detail, dynamics and sheer musicality than most and we will be very sad to see it go.

Or, at least, we will be, if we can't get our hands on its replacement, the Cantata Music Centre.

Because not only does this new player look incredible, it also manages to up the sonic ante to an unprecedented degree.

And not just for CDs, plug your laptop in or even your home network and it can do remarkable things for music stored on a PC or NAS drive.

Hence the Music Centre soubriquet, this is not just a discspinner, it's a fully featured UPnP 'renderer' with an asynchronous DAC that can do for digitally stored media what the Opus 21 did for CD.

The Cantata came about because Resolution's Jeff Kalt wanted to build an iTunes client into the XS (extra sources) box that forms part of the Opus 21 series. He ended up being frustrated by the limitations of air tunes – specifically its 16-bit/44.1kHz maximum resolution, so he started working on a streamer, CD player and USB DAC that turned into the Cantata.

While this unit retains the same 1704 multibit ladder DAC as the Opus 21 and the same basic circuit design, it doesn't have many other similarities to its predecessor. The most obvious change is the casework, which is both radical and beautiful.

Machined from solid aluminium, it is designed to offer a significant improvement in resonance control over the sheet metal Opus 21, while also offering a large heatsink for the components within the player.

Jeff actually worked with the Neal Feay Company to come up with what he describes as "an aesthetic that is softer, perhaps more organic, than traditional machined designs." The case is one reason why the Cantata is 50 per cent more expensive than its predecessor, but the other companies that use metalwork from this source all charge significantly more – just look up Constellation Audio and you'll get the picture.

The significant technology here is the degree of isolation that has been achieved inside this machine. Jeff has effectively floated the DAC, so that it only grounds to the amplifier and is magnetically isolated from the power supply, internal transport, display and all of the digital sources (including USB and the host computer).

He has also developed his own asynchronous USB software for connecting computers to the DAC. It works by pulling the signal from the computer rather than the other way around, so the DAC controls the flow of data and provides clocking with its own precision clock.

This makes USB a potentially better conduit than S/PDIF because jitter can be virtually eliminated by the interface.

The Cantata's output connections no longer feature a DIN socket, but come in single-ended XLR and RCA flavours, both of which are volume controllable. So you can hook this unit straight to a power amp or active speaker system and use the onboard analogue volume control.

Alternatively if you want to use a preamp or integrated amp, then just set the level to 100 and bypass the attenuator.

Inputs are really what the Cantata is about and why it is dubbed a Music Centre. You can hook up external sources via S/PDIF in three flavours, USB and Ethernet which means that any source with a digital output can be accommodated.

Resolution Audio also makes a device called the Pont Neuf, that converts USB to Ethernet and gives you much more range than USB, which Resolution recommends keeping to a maximum of two metres.

The transport used is a Sony device that slot-loads on the right hand side of the player. It's well hidden, but not hard to find.

Jeff did speculate about having the slot emit a white light, but changed his mind (more's the pity). It's a high-speed drive but it's not totally silent – which can be an issue when listening to quiet material late at night.

The dot-matrix display is particularly nice in the context of the drilled-out fascia, it tells you the sample rate of incoming signals unless it's spinning a disc, in which case track time and number are shown. It can be dimmed or extinguished, but looks best at its lowest brightness.

The quality of machining on this casework has to be seen and fondled to be fully appreciated, it is something else. Whether you like the styling is obviously a matter of taste, but in our view it makes a refreshing change to the ubiquitous cooling fins found on every other high-end component.

It is a solid, but compact piece that's only 230 millimetres deep and fifty millimetres high. This makes it easy to accommodate, but not, perhaps, as beefy as one might hope for the money. This, however, has always been RA's approach, keep the metalwork and the signal path to the minimum and you will get better sound, which is clearly the case here.

The remote is a basic plastic affair, but it's a dedicated device that allows input selection, track select and volume control in an ergonomic if relatively dull fashion. More important is that it has an eject button, something sorely missed on the Opus 21.

It doesn't have a great deal of competition, but the most obvious comes from Naim, whose NaimUniti and UnitiQute perform in a very similar way – both are also wireless devices. For his part Jeff doesn't like mixing wireless receivers with audio electronics and the sound quality he achieves would seem to make a good case for this argument.

That said the Cantata is more expensive than either Naim streamer, so it has its work cut out in the real world. The alternative, of course, is to go for a standalone streamer and player but we haven't heard a player of this standard for less money let alone one with a USB DAC.