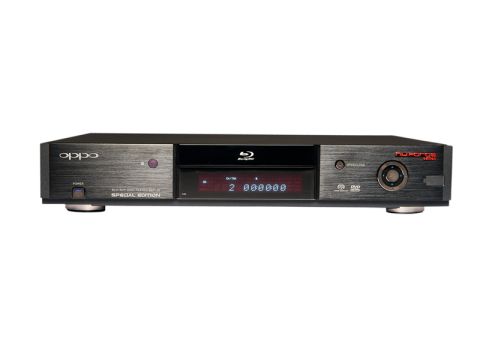 Highly capable with good sound in both stereo and multichannel modes

Oppo is not a name that we've had a lot of exposure to, but there's been a buzz in cyberspace about the BDP8SE.

It's rumoured to be one of the most capable multi-format players around. The story goes that Oppo used to make a standard BD83, then upgraded it to Special Edition status, then discontinued the non-SE due to problems sourcing parts. It was then worked on by NuForce to create the model we have here.

Its building blocks and operating software show some similarities with the Cambridge Audio Azur 650BD, but there's an important difference in the audio board, which uses DACs from ESS, the specialist also featured in the Audiolab 8200CD.

DACs plural, that is, as there are separate chips for multi channel and stereo. In offering a wholly separate stereo output path, Oppo has side-stepped a criticism sometimes made of multichannel equipment, that there's too much clever stuff in the signal path and it's true that dedicated stereo hardware, at least, gives peace of mind that one hasn't accidentally left some processing in circuit.

The whole audio board shows signs of careful design, with good-quality parts and op-amps, some of which are cunningly disguised by painting them gold. The logic and video board is a compact affair with the usual video processing options, including HDMI output at practically all frame rates and resolutions.

And since this is a Blu-ray player, the transport is a fully universal type that can read most flavours of DVD, as well as BD, SACD and CD.

This player is quite light and delicate in its presentation, with good detail and well-judged balance. A situation that seemed to suit Brahms's music in SACD, the slightly heavy texture of the music responding well to light-handed reproduction.

Something similar applied to the Mavericks track, a deceptively complex mix, featuring more instruments than are at first apparent. The NuForce Oppo proved adept at presenting these instruments as individual sounds, without losing the sense of an integrated whole.

There was also a lovely sense of space in this track and excellent energy; one listener commented that it sounded more like a live gig than a studio recording and we can see what he meant by that.

Smaller-scale music was also well served, with lively dynamics and an energetic, snappy presentation. It does seem now and then that this player's deep bass is a touch shy and that can slightly lessen the impact of some music, for instance a church organ which relies more than most on the lowest frequencies.

But the sheer vigour and bounce of the sound more than compensates for that with most styles of music. Treble is also well extended and quite sweet.

This combination of attributes is not all that common but the energy, slightly lean sound and good detail add up to performance that some listeners will fi nd very attractive.