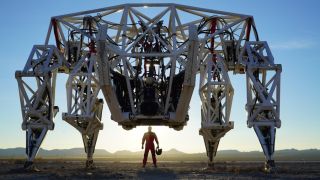 Imagine if you could upgrade your body like you can upgrade a PC. Would you add more memory? A faster processor? More stamina or sheer strength?

We’re not quite hacking humans like they do in Deus Ex just yet, but a combination of AI, implants and prostheses could enable us to upgrade brains and bodies alike, and from mental stimulation to metal machinery, technology is already able to restore lost function and make people stronger than they ever thought possible.

All in the mind

Some of the most exciting developments revolve around making better use of what we’ve already got. Researchers from the University of Pennsylvania have been experimenting with the idea of using electrical brain stimulation to restore memory, and the results are exciting: precise electrical stimulation of the left side of the brain can enhance learning and memory performance by up to 15%. The study is part of a wider program called Restoring Active Memory, which is funded by the US Department of Defense and aims to find technological ways to address veterans’ memory loss.

The idea behind electrical stimulation is straightforward – our brains run on electricity, so electricity could potentially be used to control our brains without the need for chemicals that may have side-effects – but the science is still emerging. One interesting area of study is transcranial direct current stimulation, or tDCS for short. Some studies suggest that tDCS might make us more alert and improve reaction times: again, something that’s of great interest to the military, as tests have shown it makes people twice as fast at spotting threats such as snipers.

But the applications are much wider. As Scientific American reports, “some studies suggest brain stimulation might help people with neuropathic pain as well as depression, schizophrenia and a range of other psychiatric illnesses”. However, there are negatives too: just a small difference in where electrodes are placed can have a huge effect.

Fancy flying a plane with just your mind? Jack Stewart has. The Wired reporter was the first civilian to fly King Air, a mind-controlled plane. As he points out, it’s a high-risk, low-return technology, as the pilots of the future won’t be using that kind of technology – “the planes of tomorrow will fly themselves” – but it’s a great demonstration of the power of human-computer interfaces.

The US Defense Advanced Research Projects Agency (DARPA), which played a pivotal role in bringing us the internet, is bringing such technology and artificial intelligence to artificial limbs. Its Revolutionizing Prosthetics program could “improve warfighter rehabilitation, restore function and independence to individuals living with amputation or paralysis, and offer wounded warriors the prospect of eventual return to duty”.

Meanwhile in the UK, Ottobock has developed an artificial hand that you can use to make rude gestures. It has many more sensible uses too: packed with powerful microprocessors that continuously monitor each finger, it can tell if a held object is starting to slip and adjust its grip accordingly. It's claimed to be the world’s most lifelike bionic hand.

At Newcastle University, biomedical engineers have created the 'hand that sees'. It looks like a bionic hand with a bionic eye on top – and that’s pretty much what it is. The hand has a camera that works out what the hand can 'see' and then triggers an appropriate movement. For example, if it sees a stick it knows to hold it differently than it would hold a wine glass.

It sounds simple, but it’s anything but: that analysis is the product of an advanced neural network. As lead author Ghazal Ghazaei explains: “The beauty of this system is that it’s much more flexible, and the hand is able to pick up novel objects – which is crucial since in everyday life people effortlessly pick up a variety of objects that they have never seen before.” The hand that sees is currently undergoing trials with real patients.

The 'hand that sees' is part of a long-term project to develop a hand that doesn’t just see, but which can transmit pressure and temperature signals too. Newcastle University is the lead, but the project also includes experts from the universities of Leeds, Essex, Keele, Southampton and University College London. The hand would be reminiscent of Luke Skywalker’s artificial hand – their comparison, not ours – and would wrap around the nerve endings in the recipient’s arm. Similar research is ongoing in the US too.

Another way that technology can be used in our bodies is outside them, in the form of exoskeletons. Ford is currently testing one such device, the EksoVest, which gives humans more lifting power and reduces the risk of workplace injuries. Meanwhile Hyundai is creating medical exoskeletons that enable people with mobility issues to walk. The H-MEX enables paraplegics to sit, stand, move and even walk up and down stairs.

It’s one of several exoskeletons Hyundai has created. HUMA can run at up to 12kmh, something Hyundai notes has applications for “military/industrial purposes” while the H-WEX is a waist exoskeleton designed for similar applications as the EksoVests being trialled by Ford.

Industrial exoskeletons enable people to lift more, travel further and in the case of HERMES the exoskeleton-controlled robot, punch things harder than they’ve ever punched before. They might even give us new sports: the Prosthesis exoskeleton created by Furrion is 15ft tall, weighs 8,000lbs, can run at 20mph and has been designed for 'mech racing'.

Hyundai’s research demonstrates a shift that’s occurring: while the majority of research into prosthetics and other high-tech assistance has rightly focused on restoring function to people, attention is also turning to giving people powers they didn’t previously have. In both areas the possibilities are intriguing, and exciting.