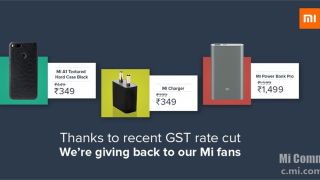 It has been a great year for Xiaomi in India. On Friday, the company announced that as a result of the GST rate cut, they have revised prices on accessories and their ecosystem products. The Xiaomi Community in India had a post for the announcement which details products which have undergone price cut.

The government of India introduced GST (Goods and Services Tax) on July 1 this year. The GST council announced a common rate of taxes on products pan India, which led to the revision in prices of various products and services in the country.

Earlier, taxes on products used to differ from state to state but with the effect of GST, that was made consistent across India.

Some products such as the 10000mAH Mi Power Bank Pro will now retail for Rs 1499 down from its original price of Rs 1599. That’s only a decrease of Rs 100 in price but something’s better than nothing.

The Mi Business Backpack, on the other hand has received a price cut of Rs 200 and is now available at Rs 1299 only.

Cases and Covers for Xiaomi’s range of smartphones in India have also received a price drop of almost Rs 100 and are available at MI India website.

Recently, they also debuted Made in India power banks - Mi Power Bank 2i in capacities of 10000mAh and 20000mAh.

Xiaomi has been over-indexing on its plans for India which is the reason why they globally announced two new smartphone series this year in the country. The company is also gearing up to launch a new smartphone, their eighth one so far, by the end of this year and have been heavily teasing it on their social media handles with the tag “Desh Ka Smartphone”.