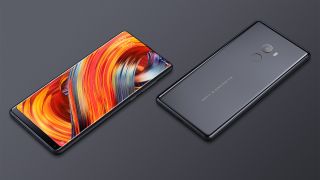 After launching Mi Mix 2 globally, Xiaomi finally launched the device in India today. It is the successor of the flagship device Mi Mix which was launched last year. At the global launch event, Xiaomi’s Senior Vice President, Xiang Wang announced to launch the phone in Indian market soon which was later on confirmed by Xiaomi India VP Manu Kumar Jain.

Coming back to the phone, the Mi Mix 2 features a 5.99-inch display with 18:9 aspect ratio, Full HD+ resolution and DCI-P3 support. To provide a bigger display to its users, the company has reduced the upper bezel with guided earpiece design and an ultrasonic proximity sensor which is placed below the display. Also, they have shifted the front camera at the bottom right corner to serve the same purpose. In addition to this, the chin size of the phone is also reduced to some extent which is 41.1% shorter than the iPhone 8 Plus, claimed the Lead Product Manager, Jai Mani at the event.

For design, Xiaomi again teamed up with the world-renowned designer, Philippe Starck who also designed the original Mi Mix. The phone comes with four-sided curved ceramic body along with aerospace grade aluminium alloy frame which is light, firm and resistant to corrosion.

The phone is powered by an octa-core Qualcomm Snapdragon 835 processor with a clock speed of 2.45Ghz. The company claims that it is the world’s first 10nm processor which promises to improve the performance by 27 percent. The processor is supported by a 6GB LPDDR4X RAM and 128GB internal storage along with Adreno 540 GPU. It runs on MIUI 8 based on Android N. It also has a fingerprint sensor and USB Type C port which supports Quick Charge 3.0.

In terms of optics, the phone comes with a 12MP rear camera with 18k gold-plated camera rim, Sony IMX 386 sensor and 1.25um pixel size. Its 4-axis OIS stabilization promises to offer great shots in low lighting conditions and also provide steady shots in motion. The front camera comes with a 5MP sensor covered with Super Black lens coating which allows the camera to completely merge with the body when the display is off.

The Mi Mix 2 also features global LTE support with 43 bands across 6 network modes which promise to operate in around 226 regions across the world. Apart from this, the phone has Bluetooth 5.0, dual SIM and multi-function NFC. A 3400mAh battery sits under the hood and provides enough fuel to the phone to last for the whole day.

Following this, the phone will go on sale across Mi.com, Flipkart, Mi Home stores and on all offline partners during the first week of November at a 0 percent interest EMI scheme.