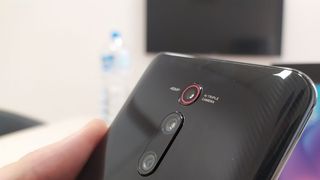 Earlier in 2019 Samsung unveiled a smartphone camera sensor with a mad 108MP resolution, but it looks like it won't be the first to employ it – Xiaomi phones are set to use it first, as the company is about to unveil the Mi Note 10 with it on board.

That's according to Xiaomi itself, as it posted a teaser on Facebook that names the Mi Note 10, and states it will be the 'world's first 108MP penta camera'.

There's a lot to unpack in that statement, but the gist of it is that the Xiaomi Mi Note 10 could be a new contender for the title of best camera phone. We heard Xiaomi was readying 108MP phones in mid-2019, but since so few phones have 64MP cameras, we thought 108MP would be a way off. Evidently we were wrong.

The Xiaomi Mi Note 10 is the successor to the Mi Note 3 from 2017 – we'd previously heard Xiaomi was planning on bringing its 'premium' line of smartphones back, and the Facebook post confirms this news.

We know Xiaomi is planning an event on November 5 to launch its new smartwatch line, and it's very possible the Mi Note 10 could be there too. We'll keep you updated when we hear anything new.

A smartphone with a 108MP main camera won't automatically take 108MP snaps, but it will use the sensor to take high-quality pictures at a lower resolution, letting in more light to enhance the image.

There's more to the Mi Note 10 than its main camera though, according to leaks we've heard, and the specs for the Xiaomi Mi CC9 Pro, a smartphone that launched in China that we're expecting to be re-branded as the Mi Note 10 elsewhere.

Firstly, there's the zoom lens, which according to Xiaomi facilitates 5x optical zoom and 50x digital. That's as much zoom as the current camera phone champ, the Huawei P30 Pro.

Then there's an ultra-wide angle lens on a 20MP sensor. That's one of the highest megapixel counts we've seen behind an ultra-wide lens, so your vista and group shots should look great.

Rounding out the penta-camera array is a portrait camera of 12MP and what's either a depth sensor or a macro camera, for pictures taken only 1.5cm from the subject. The latter will likely be great for picking up intricate detail in objects.

An arsenal of five rear cameras should make the Xiaomi Mi Note 10 a photography powerhouse, enough for it to compete with the best from other brands like Samsung, Huawei and Google.

We'll hopefully know more after the November 5 event, and will let you know for sure either way.