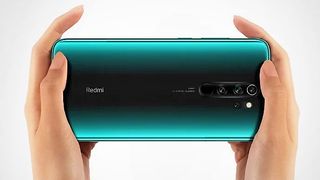 Xiaomi continues the pre-launch hype building of the Redmi Note 8 series, this time by showcasing how durable the phone is, in a bizarre stress test.

On Weibo, Redmi shared a small video that involves a weightlifter, a 90kg barbell and two Redmi Note 8 Pros. The two phones are placed on the floor with the displays facing the ground followed by a heavy weightlifter who positions his feet on the devices, putting all his weight on them. He then power lifts the 90kg barbell over his head for a few seconds before dropping it down. The judges rush to the stage to check on the phones which appear to be unharmed.

There's still no confirmation if the Note 8 Pro will have a glass back or a plastic, but considering that the Note 7 Pro implemented a glass design, we think they are going to stick to the former.

Of course, this is a very unrealistic scenario which consumers are not going to face, neither is this a very scientific way to prove a phone’s strength. Regardless, it’s a fun little party trick not meant to be taken for its face value.

The Redmi Note 8 Pro will be unveiled on August 29 in China alongside the regular Redmi Note 8, and will be the latest smartphones in Xiaomi’s budget portfolio.

The Redmi Note 8 Pro will be powered by the gaming-centric MediaTek Helio G90T chipset for one of the best performances in this price segment. That will be accompanied with a big 4,500 mAh battery with support for 18W fast charging over USB Type-C.

The other key highlight of the Redmi Note 8 Pro will be inclusion of a 64MP quad-camera setup. It is also said to include an ultrawide and a telephoto lens, along with a depth sensor.

The Redmi Note 8 will be a slightly more affordable sibling that will be powered by the Snapdragon 665 and a similar quad-camera arrangement with a 48MP primary camera.

The Redmi Note 8 series will be announced on August 29 in China and should make its way to India in the coming months.