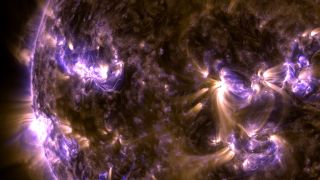 While scientists continue looking skyward to find more insight into the mysteries of dark matter, some have begun looking to our sun for "dark sunshine."

It's currently believed that dark matter makes up about 85% of the matter in the universe, and is partly responsible for the structure of galaxies as we see it today, but other than that, not much else is known about it.

Now, scientists from the University of California, Irvine, have published a paper that explains that dark matter may also be hiding in the sun and producing a unique sort of light.

Previous research has looked for signatures of dark matter in neutrinos (one of the fundamental particles that make up the universe) from the sun, however this has yet to yield any results.

Instead, Jonathan Feng of UCI believes we should be looking to the sun instead to find dark photons, a.k.a dark light.

The paper explains that dark photons may be created when two dark matter particles annihilate each other within the sun, producing an energy or a type of dark light.

They explain that these dark matter particles could be living in a "dark sector" inside the sun, mirroring the particles of normal matter that we can actually see. And while dark matter isn't visible to us, the resulting dark photons should eventually devolve into standard particles we can see, like positrons, which are then released into space by the sun.

Feng and his colleagues hope to study data collected from the Alpha Magnetic Spectrometer (AMS), a particle detector attached to the International Space Station, as it catches events from the only star in our solar system. They hope to be able to find evidence of dark photons and dark matter within these particles.

Unfortunately, The AMS could take up to three years to snag up to 10 positrons, but Feng believes even a few positron particles could be enough to shine more light on dark photons and dark matter.