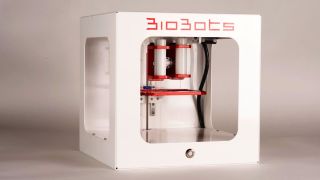 Need a new organ? Pretty soon you might be able to print one, with a 3D printer capable of creating human tissue by using cells as ink.

Sounds like science fiction? It's not - the technology is almost on the market, created by a Philadelphia-based firm called Biobots. They've already built a first-generation bioprinter called the BioBot 1. It looks a lot like any other 3D printer, but it uses a liquid mixture of different cells - called "bioink", instead of plastic.

Two extruders are used to build up structures over time, which are fused together using blue light. Right now, it can cope with collagen - allowing the team to print out a replica of Van Gogh's ear on stage when the printer was first announced back in May 2014.

Get The Right Permits First

But now it's actually on sale from the company's website. If you want one, it'll set you back about $10,000 - plus materials. Make sure you've got the right permits, though - in the States, the FDA hasn't yet approved 3D printers for human use.

Meanwhile, Biobots is hard at work on the next generation of its technology - the ability to print blood vessels and create organs. Down the line, 3D printers could mass-produce new organisms that could revolutionise our food supply, create far cheaper drugs or even terraform other planets. The sky's the limit.