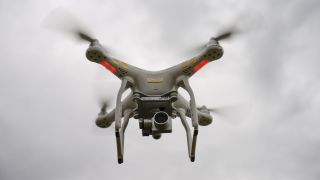 Keep your drone where it should be.

If you unwrapped a nice new drone this Christmas then you might want to make sure it steers clear of new technology being developed by Airbus: the aircraft manufacturer is working on jamming devices that will bring your flying gadget down to Earth with a bang.

Sounds cruel? Like the rest of the aviation industry, Airbus is worried about drones getting too close to airports, transporting contraband into prisons and generally causing mischief.

Apparently the system, which Airbus has been demoing at CES this year, uses a combination of radar, infrared sensors and other equipment to detect when your drone is somewhere it shouldn't be. It can work from up to six miles away too.

Airbus says its technology can zero in on a specific drone and effectively take it over. And it doesn't just go after the drone either – the system is able to track down the pilot by tracing the signals being sent to the drone, information which can be passed on to local law enforcement.

"All over the world, incidents with universally available small drones have revealed a security gap with regards to critical installations such as factories, airports or nuclear plants," said Airbus' Thomas Müller.

Stick within the law though and your drone should be safe: keep your gadget in sight, stay below 400 feet, avoid large crowds of people and buildings, and steer well clear of airports and the planes flying in and out of them.