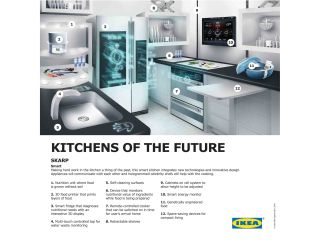 The Ikea kitchen of the future - but will it flat-pack?

The Apple iPad will be the main control centre for the kitchen of the future, according to Ikea who has peered into its crystal ball and predicted what the culinary world will be like in 2040.

The research, which comes from the Future Laboratory by way of Ikea, has looked into what the humble kitchen may offer in 2040 and comes up with three different scenarios which it has annoyingly called the Elementara, the Skarp and the Intuitiv.

The Elementara kitchen is what is called a 'back to nature' kitchen and will be filled with all things energy saving and green.

This includes areas in the kitchen which will 'encourage' you to grow your own food. Instead of refrigerators food will be kept in 'cold larders' and recycling facilities will be ingrained into the kitchen.

We can't help thinking that this isn't the kitchen of the future, more describing how our ancestors lived.

All that needs to be added is meat stored in salt and the constant fear that your 'grow your own food' patch in the kitchen will entice rats riddled with Black Death into your home.

Luckily, the boffins at the Future Laboratory (which is probably a shed in Sussex) have also come up with the Smart kitchen – or the Skarp.

Skarp is all about synchronised appliances, which will be controlled by an iPad-like device.

The kitchen will also be self-cleaning, which sounds awesome, and mobile phone apps will control carbon emissions and thermostats.

Third, and thankfully last, is the Intuitiv. This is a kitchen that matches your mood. With LED lighting changing to suit how you are feeling, aromatherapy piped through the walls which is synched to help with different times of the month and a hologram chef who will feed you happy pills every time you are feeling down.

If you think the above is absolute tripe – we are wondering how many thought showers it took to come up with the ridiculous names – then you only have yourself to blame.

The study was compiled by answers given by the general public on what it though would be in the kitchen of the future.

1,895 respondents aged from 18 to 65+ years old living in the United Kingdom, including Wales, Scotland and Northern Ireland, were asked their thoughts.

We hope that every one of the 1,895 people were taking the Michael.