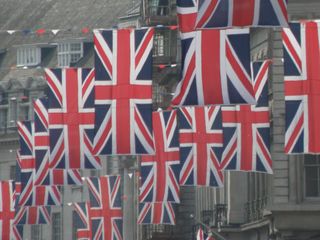 Rule Britannia! Ba-dum ba-dum ba-dum! While William and Kate's wedding packed the streets of London, we decided to celebrate something a bit more contemporary: Britain's love of tech.

As Patrick Goss puts it: "There's no mistaking the fact that the UK is in love with technology. We are a nation of early adopters, enthusiasts and technophiles. We love playing with the latest kit, snooping out the biggest bargains and, thankfully for TechRadar, reading about it."

We decided to have a Brit Week on Techradar because Britain has much to shout about. All those tablet PCs everyone's getting worked up about? Almost all of them are straight outta Cambridge, thanks to processor technology developed and licensed by ARM - check out our interview with those guys later today.

The shiny nuggets of consumer joy that makes Apple's tills ker-ching were designed by a chap from Chingford. The World Wide Web? Londoner Tim Berners-Lee. And when it comes to silly-goggled headache generators, nobody does 3D TV like Sky.

We're one of the world's most tech-savvy markets, as former iPlayer boss and current Microsoft UK consumer and online MD Ashley Highfield told us. "We are [Microsoft's] number two market and the understanding is that the British consumer is very tech savvy," he says.

We're not just tech savvy, though: we're design savvy too. That's why Microsoft has decided to get sexy - or at least, to show off some nice laptops and Xboxes.

"The UK loves technology and innovation so we will have to lead with devices like the Kinect and other things that push our innovation to the fore, rather the competing solely on price," Highfield says. "We're keen to play in the area of design aesthetics."

Before we break out the Union Jacks again, the picture isn't entirely rosy: we've got the brains, it seems, but we're not always helping them achieve their full potential. Sir James Dyson is the poster boy for UK inventors, and he explained how the UK is falling behind in innovation.

In short, we don't make enough stuff. "Recent GDP figures show that 76% of our economy is based on the service industry. If we don't turn ideas into exportable goods, we will lose our competitive edge," Sir James told us.

Part of the problem is that we don't have enough people studying engineering. "In the UK, there are 37,000 engineering vacancies every year, but only 22,000 graduates... science and engineering will be our future. Holding these subjects in high esteem is a good way of creating interest among our young people who will come up with the ideas of the future."

Encouraging creativity was a key theme of our Brit Week interviews, with legendary games developer Peter Molyneux praising the innovation in Xbox Live Arcade games and describing the results of his own firm's Creative Week, where everyone was allowed the time and freedom to push their own ideas.

"All in all we saw 35 different projects which ranged from tech, ideas, prototypes to almost finished games and we all mutually impressed each other. I can safely say that personally I was blown away by everything I saw that day."

Coming up with good ideas is one thing. Getting investors to help turn them into real products is another. "The real problem nowadays for many British devs and studios is the fact that they are struggling more than ever to get the investment they need in order to produce big games," Molyneux says.

He's quick to point out that it's not a UK-only problem, but it's still a problem: there's a yawning chasm between indie game developers and big-budget, triple-A developers.

Sir James Dyson argues that there's a similar lack of vision in engineering. "Ideas need to be developed to be turned int commercial successes," he says. "And we have to start now."