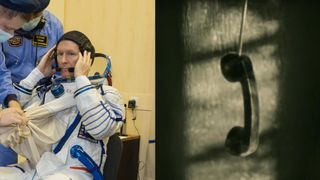 Astronaut Tim Peake is the first person in space to make a prank call, that we know of.

Explaining via his Twitter account, it appears he accidentally dialled in the wrong number on Christmas Eve and ended up on the line with a very confused woman as he exclaimed 'Hello, is this planet Earth?' at her.

Tim Peake is currently aboard the International Space Station for the next 6 months, hoping to move science forwards in its understanding of how things work in space, whilst orbiting the earth several times a day.

We think the conversation may have gone a little like this helpfully illustrated via Adele's new video.

Talk about crossed wires, but at least this gave us a bit of early cheer. Let's hope he managed to get NASA on his friends & family call plan, as the cost of phone calls from space must be...astronomical.