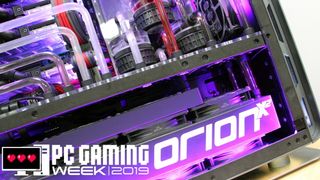 There’s something surreal about using a PC that costs more than most people’s house deposits – but that’s exactly what’s possible if you take the plunge on Overclockers UK’s latest machine.

The 8Pack Orion X2 costs £33,000 – or around $43,000 if you’re in the USA, or AU$60,000 in Australia – and the system includes incredible, benchmark-breaking hardware. But, at first, it’s hard to get past just how absolutely, utterly outrageous it looks.

The interior is dominated by three water-cooling loops that are augmented with custom-made acrylic reservoirs, and the entire rig is themed with black, red and grey – from the coolant to the hand-sleeved cables.

It's illuminated by BitFenix Alchemy RGB LED strips, and the colours carry over to the Phanteks Enthoo Elite case. The entire rig is 750mm tall, and it weighs more than 30kg.

At first glance the Orion looks utterly sensational. But it’s only when you get closer that the real work and attention to detail is revealed.

Take the water-cooling. There are three custom loops inside the Orion X2, and their huge 360mm and 480mm radiators are well-hidden and augmented with custom-made 8Pack fans. The loops all chill different components, and they’re color-coded with different coolants to match the red, black and grey theme used elsewhere.

The loops converge in three pump units in the middle of the chassis, and the coolant then traverses a stunning reservoir that’s custom-made from acrylic in the shape of the 8Pack logo.

Different parts of the block are filled with different coolants, and that’s not the only area where custom-made acrylic is used – there’s another slab of it at the bottom of the rig.

There are stunning details elsewhere in the build. Water-cooling hardware comes from the experts at EK. Mayhems coolant is used throughout, and the three loops are all managed by an Aquacomputer Aquaero 6 controller. It all makes for an interior that’s filled with pipes that course with coolant – and one of the most eye-catching designs that we’ve ever seen.

Buy one, get one free?

The Orion X2 looks spectacular. And then, once you get beyond the design, there’s the small fact that you’re not paying for one PC here – you’re actually getting two systems inside this one case.

The main PC is one of the beefiest consumer rigs that’s ever been assembled. Processing power comes from the 18-core i9-7980XE that’s overclocked to at least 4.6GHz, and it’s paired with 128GB of overclocked memory and three Nvidia Turing graphics cards.

The Asus ROG Rampage VI Extreme Omega is a huge slab of PCB that’s littered with high-end features, from all-board cooling and fantastic lighting to beefed-up wireless, Gigabit Ethernet and audio. It’s simply one of the best motherboards on the market.

Preliminary benchmarks reveal that the Orion’s main system delivers sensational speed. In the 3D Mark Fire Strike test the three RTX 2080 Ti cards scored 39,228 – which is around 12,000 points more than a single RTX 2080 Ti. The triple-card arrangement scored 29,706 in the Fire Strike Extreme benchmark – while single-GPU machines are regularly 13,000 points behind.

The three graphics cards do not deliver a clear tripling of the performance when compared to a single GPU, of course, but that rarely happens with multiple cards.

Get beyond that fact, and the situation looks rosier. There is not a gaming task that this PC won’t handle: it’ll play every game, at every resolution, at top settings.

It’ll run work tasks with ease, too. Whether you’re rendering, creating 4K video, operating CAD applications or doing anything else that requires lashings of GPU power, this PC will deliver it with aplomb.

The processing power on display is also stonking. In Geekbench the overclocked Intel Core i9-7980XE scored 34,505 points – around 10,000 points better than a conventional, overclocked Core i7 CPU. In the tougher Cinebench test the Core i9 chip scored 4,451cb, which is nearly three times as fast as normal Core i7 components.

As ever, heading up the CPU stack and having a higher clock does mean diminishing returns – the gap from a Core i7 to this Core i9 isn’t as broad as, say, the gulf between a Pentium and a Core i5.

However, the Orion’s main rig delivers fearsome CPU power, and that Cinebench score proves that this PC has the cores and speed to handle any work application. There simply is not a productivity task that this rig cannot cope with.

And, despite all of the power on show, the Orion X2 kept quiet throughout our testing. Aside from the low rumble of coolant and fans, this system was barely audible. It’s certainly quieter than most other gaming PCs.

It must be noted that the system we’ve tested used RTX 2080 Ti cards instead of Titan RTX GPUs.

The three 2080 Ti cards aren’t slow, of course, but the trio of Titan RTX GPUs in the $40,000 version of this PC will deliver significantly more performance.

If you did want this PC with 2080 Ti cards, it would bring the price down by around $5,00/£3,600/AU$6,600. Overclockers UK allows for customisation in other departments too – the memory allocation can be halved, you can step down to two Titan RTX cards, and the hardware inside the smaller system can also be changed.

It’s also possible to alter the color scheme. If you don’t like black, red and grey, the cable sleeves, coolant and other aesthetic features can all be changed.

The main rig, understandably, takes up most of the spec inside the Phanteks chassis. But, if you don’t need that amount of power, you can switch to the Orion’s second machine. It’s a mini-ITX rig that sits beneath the main trio of graphics cards, and it has its own fearsome specification: an Intel Core i7-9700K overclocked to at least 5GHz, an Asus ROG Strix motherboard, two Samsung 970 EVO SSDs and the same GPU as the primary PC.

The smaller PC is no slouch. It zipped through Cinebench with a score of 2,230cb, and returned a result of 30,028 in 3D Mark Fire Strike.

Those scores are better than most full-size gaming PCs with similar components, and they’re testament to 8Pack’s overclocking and part-picking skills. It also means that this PC can handle 4K gaming, high-end content creation, streaming and rendering with plenty of pace.

Both rigs are powered by one PSU. It’s an 8Pack-branded Super Flower unit that delivers a monster 2,000W of power, and a rocker switch on top of the case switches between the two systems.

8Pack a lot in

This machine is the flagship of the Overclockers UK range – which means it’s designed, built and optimised by Ian “8Pack” Parry – a world-champion overclocker who holds multiple world records when it comes to tweaking the latest silicon.

8Pack picks the parts for these PCs himself, testing dozens of chips in order to find the fastest CPUs and GPUs with the heftiest amounts of overclocking headroom. It’s a process that generates extra performance and stability for every 8Pack machine, and it just isn’t used on more conventional PC builds.

Every part inside this machine is hand-picked, hand-tested and tweaked to deliver exceptional performance and rock-solid stability, which does partly explain the huge prices. It also goes some way to justifying the 42-day lead time on these rigs.

And then, when the machine has been built, it’s furnished with a plate that has 8Pack’s signature and your unique build number – and it’s delivered in a custom-made 8Pack flight case.

The 8Pack-inspired Infin8 range has prestige systems that aren’t quite as expensive as the machines that 8Pack builds himself, and the rest of the Overclockers UK PC range is far more conventional – and far more affordable.

You won’t get the level of finesse or performance on these PCs, of course, but you will be able to handle the vast majority of games and work applications easily – and you won’t have to take out a second mortgage in order to afford one of the firm’s normal systems.

The Overclockers UK 8Pack Orion X2 is an absurd PC – an absurd pair of PCs, in fact. It’s fantastic, too.

We’ve never seen a PC with such eye-catching, intricate building work, from its three water-cooling loops to its extensive lighting, sleeved cables and custom-made acrylic. And, similarly, we’ve never tested a PC that’s this powerful. The main rig will handle literally anything, and the secondary system is still better than almost anything on the market.

There’s no doubt that using a $40,000 PC is a luxurious and enjoyable experience, especially when the power on offer is balanced with incredible design and quiet operation.

However, there’s also no doubt that most people just do not need this system. Instead, more suitable options can be found in the rest of the Overclockers UK range.

If you do have a vast bank account and a desire for the best, though, then knock yourselves out. Just don’t be surprised if we turn up to have a go on your PC as soon as its flight case arrives.