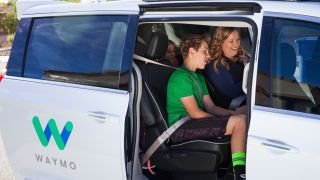 In the same week Uber is talking flying cars and a Google co-founder is showing off his own, Alphabet's Waymo is now accepting applications for its self-driving car early rider program.

Waymo began as Google's self-driving car project but was spun out as its own entity under Alphabet, Google's parent company. Now, Waymo is operating an early rider program in Phoenix, Arizona, letting regular folks apply to use the company's self-driving fleet for their everyday transportation needs.

Having a self-driving car at your beck and call sounds kind of awesome — Waymo is encouraging riders to take as many trips as possible to work, school, the movies, wherever. Current participants say they feel less stressed getting to work or other obligations, aren't bogged down by traffic, and don't worry about becoming tired while driving.

These are some of the benefits of self-driving cars that manufacturers stress, and Waymo is clearly highlighting the positives experienced by program participants.

Of course, the company is getting something out of the deal, too. Waymo aims to gather crucial data that will shape how its cars work, including where people like to go in a self-driving car, how they interact with the vehicles and what controls and information they want displayed in the interior.

And though the cars are driving themselves with passengers inside, there is a test driver "monitoring the rides at all times," in case you were wondering.

This is a limited program, Waymo stressed, so everyone who applies shouldn't expect to get their own set of self-driving wheels. It's also only open to residents in parts of the Phoenix metropolitan area. Waymo is, however, expanding its fleet with 500 more Chrysler Pacifica Hybrid minivans, and will continue growing the program as the year rolls on.