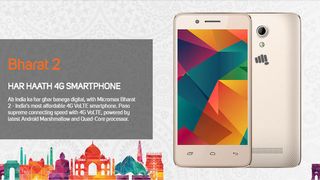 With competition in the ultra-affordable 4G phones heating up, Micromax has launched the Bharat 2 Ultra Android smartphone in partnership with Vodafone, one of India’s leading telecom operators. Priced effectively at Rs. 999, this is one of the cheapest Android smartphones out there.

Talking about the core specs of the Bharat 2 Ultra, you get an Android 6.0 Marshmallow device powered by a quad-core Spreadtrum processor. The phone comes with 512MB RAM and 4GB internal storage, a 2MP rear camera and a 0.3MP front camera. Backed by a 1300mAh battery, these specs are the same as that of the Bharat 2 which was launched earlier this year at a price of Rs. 3499.

Micromax Bharat 2 Ultra comes with a price tag of Rs. 2,899, but effectively the price comes down to just Rs. 999 – Vodafone is offering a refund of Rs. 1900 if you recharge with its Rs. 150 pack for 36 months. The refund will be issued in two instalments – the first Rs. 900 after 18 months and Rs. 1000 at the end of 36 months. However, Vodafone will issue the refund as a credit in the customer’s Vodafone m-pesa account.

It is worth recalling that after the launch of the JioPhone earlier this year, incumbent telcos like Airtel and Idea had promised to launch their own affordable 4G LTE capable smartphones. To this end, Airtel launched the Karbonn A40 Indian smartphone at an effective price of Rs. 1399. Micromax has so far launched two affordable smartphones too, one in partnership with BSNL and another with Vodafone today.