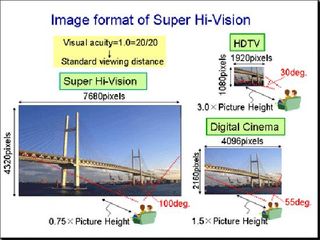 SHV is a stunning technology, but it seems unlikely that we'll ever see much of it

We looked at Japan's Super Hi-Vision (SHV) ultra high-definition television system almost a year ago, but weren't warned then that the stunning quality and size of the images it spits out could have viewers losing their lunches.

According to an update on SHV by the BBC, the 4,320 horizontal and 7,680 vertical lines are likely to produce such intense video that anyone watching it at close quarters will be overcome with nausea.

Consequently, and also because of the sheer size of screen needed to accommodate SHV, of course, the company behind it - NHK - thinks the technology is unlikely to make it to the typical living room.

Instead, the Japanese state broadcaster will probably aim to sell SHV to art galleries or sports arenas, where the impressive resolution will either be needed or mitigated by a safe viewing distance, for example.

On the technical side of things, there are also considerable hurdles that will throttle interest in the 16x HD TV standard. Not only are there just two SHV cameras in existence, but they also can record just 18 minutes of video a day and that takes up a massive 3.5TB of data-storage space.

Still, we're betting on one of SHV or the competing standard for spectacular high-def video from JVC making a name for itself before too much longer.