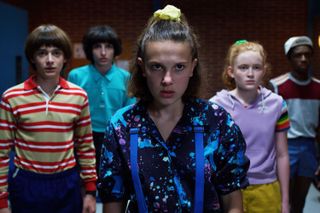 Stranger Things Season 4 is likely to still be a year or more away, but we already know the name of its first episode: The Hellfire Club. This was revealed on the Stranger Writers' Twitter account last night, and it suggests the script is finished in some form. Take a look:

The Hellfire Club will mean something to Marvel fans in particular. It's the name of a group of X-Men villains that debuted back in the '80s during the eventful Dark Phoenix storyline, and notably brought the character Emma Frost into the X-Men comics. They're a criminal illuminati-type group, with an evil British vibe. A version of this organization appeared in 2011's movie X-Men: First Class. The Hellfire Club was also a real-life group of rich British people that existed in the 1700s.

It's possible this is just a working title, given how secretive plot details around the show are – the name certainly conjures up thoughts of a group of villains, and pop culture references are a staple of the show, of course.

A long wait ahead

Season 3 of Stranger Things dropped in July, and the gap between that and season 2 was around 20 months. This would suggest that the best possible scenario is we'll see season 4 in late 2020, or at best early 2021. We'll keep you updated as more details about the series trickle out in the coming months.

That Stranger Writers account is pretty fun if you're a fan of the show, by the way. Follow them and you'll be subjected to this kind of content:

bringing back these gems of maya and joe #StrangerThingsDay pic.twitter.com/tdmoBmMzpLNovember 6, 2019