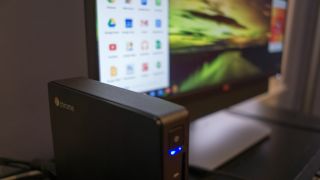 When Chrome OS was announced in July 2009 it was a bold idea that traded the ever increasing complexity of PC OSes and traded it all for a robust web browser. The idea behind it all was a simple, lightweight operating system that would run most all of it's applications through a web portal. By running practically all programs through a web browser this allowed manufacturers to build devices with a modicum of processing power and memory compared to a system running Windows or OS X.

After a few early stumbles these low-powered Chromebooks, Chromebases and Chromeboxes have matured over the years. Now Chromebooks are all grown up; Acer announced its biggest unit yet with a 15.6-inch screen while the Samsung Chromebook 2 pushed the envelope on budget design and engineering.

While the hardware has stepped up, how far has Chrome OS come along in the same five years? As I recently found out, not very far at all.

I would be wrong to say there haven't been any new features added; a three-finger swipe expands a Expose view of your open windows, Google Now cards trickled down from Android to Chrome along with a handful of apps, plus Google added multi-user support in September 2014

Despite these small changes, the cloud-based OS and its web apps have remained relatively the same in the last five years. At the same time, we've seen some stark revisions to desktop operating systems including Windows 10 and OS X Yosemite. Google still has some big gaps fill in with Chrome OS. Here's what I found missing after living in the cloud for a week with the Acer Chromebox CXI.

Comparing these two images of Chrome OS circa 2009 to its modern counterpart, it clear not a lot has changed. It might just be personal preference but I feel the UI could certainly use a bit of spit and polish.

It doesn't have to compromise the spartan aesthetic of Chrome OS either. Google could simply add a few more Android Lollipop material design inspired animations and icons to spruce things up visually.

At the same time it would make sense for this always web-connected operating system to send more periodic updates. Google Now cards could pop up as they do on Android Wear, notifying users of information pertaining to their location and recent searches. As it stands Google Now notifications only show me that I've taken a screenshot and to remind me of an upcoming meeting, but it fails to notify me when I've received an email and messages.

When I first visited the Chrome OS app store last March, it was in a sad state of affairs. The digital marketplace was a mess filled with unofficial Spelunky and CounterStrike clones ported over to the cloud-based OS. Other apps and games, meanwhile, only existed to spam you with advertisements once you've downloaded and opened the software.

After revisiting the store in the last week, things have improved. Android apps ported over to Chrome OS have bolstered the app store, and there are games like Angry Birds and Cut the Rope. Meanwhile, there are a few more useful productivity tools such as Mint, Wunderlist and Evernote.

Technically these are only neatly presented wrappers over what are essentially pre-existing web apps, but it's one good step towards making Chrome OS better integrated with mobile devices. I hope Google will continue expanding its app store offerings so Chrome can truly compete with Windows and OS X.

Current page: In need of some spit and polish