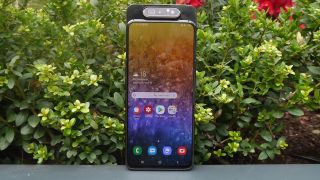 Samsung has launched the world's first phone with a 48MP rotating camera, the Galaxy A80 in India. As a result, you get a notch-free screen to watch content and play games without any hindrances in sight. Samsung goes for a triple camera setup housed in a rotating module to cover both the sides at any given time which is quite an eye-catcher.

Samsung Galaxy A80 is priced at ₹47,990 and will go on sale starting August 1 across all major online and offline retail stores along with Samsung's e-Shop and Opera House. Interested buyers will have an option to choose between three colour variants-- ghost white, phantom black and angel gold.

The Galaxy A80 has an aluminum chassis with a Gorilla Glass 6 back and is 9.3mm thin. On the front, there's a 6.7-inch Super AMOLED display with a Full HD+ (2400 x 1080 pixels) resolution display which is further topped with Gorilla Glass 3. The slightly higher pixel ratio gives it a 20:9 aspect ratio. Also, there's a fingerprint sensor embedded into the display.

It is powered by Qualcomm Snapdragon 730 chipset with an octa-core CPU and Adreno 618 GPU. This is further paired with 8GB of RAM and 128GB of storage. Samsung Galaxy A80 runs on Android 9.0 Pie-based OneUI.

The triple camera setup consists of a primary 48MP sensor with an f/2.0, an 8MP ultra-wide lens accompanied by a time-of-flight 3D sensor. As the camera is housed in a rotating shell, the same can be used for selfies.