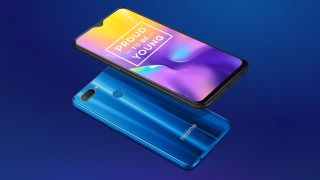 Realme Mobiles, a spinoff from OPPO which was formed about six months back has launched its fifth smartphone in India. The Realme U1 broke cover earlier this morning at an event held in the capital. The U1 is the first smartphone by Realme in their new U-series lineup which the company claims is the new “photography expert” on the block.

The U1 features a 6.3-inch FHD+ (2340 x 1080 pixels) IPS display which sits flush with a waterdrop notch design on the front. This gives the phone a 90.8% screen-to-body ratio with a 19.5:9 aspect ratio. This is further topped with a layer of 2.5D Gorilla Glass 3 for protection against regular wear and tear.

Realme U1 is 8mm at its thickest and weighs around 168g. The company has adopted for a diffraction effect on the rear panel that has been treated to a 13-layer lamination. The U1 comes in three color variants, black, blue and gold.

The launch of the Realme U1 was also the global debut of MediaTek Helio P70 chipset which is supported by an octa-core CPU clocked at upto 2.1GHz. The SoC uses ARM Mali-G72 for graphics rendering. There are two RAM and storage variants of the U1 for buyers to choose from - 3GB RAM with 32GB storage and 4GB of RAM with 64GB internal storage. The storage can further be expanded by upto 256GB via microSD card.

Realme U1 runs on Android 8.1 Oreo with ColorOS 5.2 custom skin.

Coming to the camera department which Realme touts as the USP of the phone, the U1 sports dual cameras on the back. The primary sensor is a 13MP snapper with a f/2.2 aperture and a 2MP secondary camera with a f/2.4 aperture which assists in collecting depth information.

On the front, there’s a 25MP selfie camera with Sony IMX576 sensor and a wide f/2.0 aperture. Additionally, the selfie camera has features like back-light clarity, night shot, portrait mode with different lighting effects among others.

Other features include a game space that boosts the performance of games, system optimizations that result in faster app launches and face recognition. There’s a fingerprint sensor on the rear panel as well, in case you do not want to unlock the phone using your face.

Powering the Realme U1 is a 3,500mAh battery which should easily power through a day’s worth of usage on a single charge.

Realme U1 price and availability

Alongside the U1, Realme also launched two new accessories for the phone, the Realme U1 Iconic Case and Realme Buds, both of which are priced at Rs 499.

Realme U1 goes on sale on December 5 at 12 in the afternoon exclusively on Amazon India.