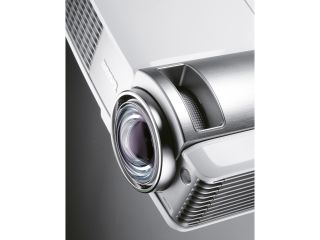 BenQ has unveiled a number of new projectors for both home entertainment and business use.

First up was the rather impressive looking short-throw machines. Made for those who are stuck for space, the MP522 ST is able to project an image of 50-inches from just a metre away.

Noise levels are quiet, too, with the projector gently humming at around 31 decibels in normal mode and 26 dB in 'eco' mode. When it comes to brightness, there's 2,000 ANSI lumens. This particular model has been aimed at those in business and education, and because of this, there's some interesting new features like digital zoom, closed captioning and a built-in speaker.

BenQ describes the MP512 as having an "extraordinary posterior" and "barrel shaped lens". Excuse us while we go for a cold shower.

Interestingly, there's also Wall Colour Correction, so even if you don't have a bright-white wall to project on, the projector will calibrate as needed.

Two other projectors being launched want to bring a bit of brightness into your life, sporting a whopping 6,000 and 5,000 lumens respectively. The SP92- and SP870 are for those who don't want to turn the lights down low when projecting their wares.

The SP920 is the daddy of the bunch, weighing in at 11kg, with the 870 less than half the weight at 4.9Kg. Contrast on both is 2,000:1 and Wall Colour Correction is very much present and correct.