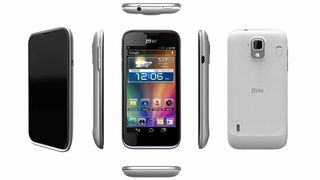 A new, affordable Grand X replacement on the way?

It looks like Chinese manufacturer ZTE is prepping a new flagship handset in the form of the Grand X Pro, if a leaked photo is to be believed.

We hope the ZTE Grand X Pro builds on the relatively average specs of its predecessor, but all we've got to go on is the name and an image, tweeted by EvLeaks.

EvLeaks has a relatively good track record when it comes to leaking handsets, with the same Twitter feed correctly revealing the HTC One X+ back in September.

Specs wise we don't have any leads, but you probably shouldn't get your hopes up for a Samsung Galaxy S3 challenging handset, with ZTE concentrating more on affordable smartphones.

If the ZTE Grand X Pro is indeed in the pipeline, it could well make an official appearance at CES 2013 in Las Vegas or MWC 2013 in Barcelona at the start of next year.

We've contacted ZTE about the Grand X Pro, and we'll update this article once we hear back.

From EvLeaks via Android Central