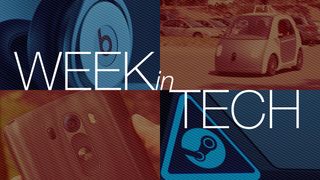 Could Dr Dre's long-delayed Detox album be the One More Thing at next week's WWDC? Probably not - but the charismatic rap legend does have a new job at Apple, where he and his Beats Audio partner Jimmy Iovine will have roles as "Dre" and "Jimmy" respectively.

And that's not even the strangest thing that happened this week. It's a particularly weird Week in Tech!

"We love Steve Jobs, but he was wrong". That's LG's head of smartphone planning, Dr Ramchan Woo, talking about the incredibly high-res screen of the LG G3: apparently Apple's idea of a retina display just isn't good enough. Screen aside, is the G3 any cop? Our very own Gareth Beavis says yes - but he's not convinced it's a market leader.

Naming things is hard, and we'd love to know what names Samsung considered before coming up with Simband. Popeyes? Aladdun? The wearable tech is a cross between Sony Core and Android Wear, and it's designed for third parties to develop "advanced sensors, algorithms and other technologies" for Samsung hardware.

Google has unveiled its new self-driving cars, and unlike previous versions there's no steering wheel or pedals for human intervention. Our Gary Marshall reckons that the new cars "are so light, so slow and so packed with foam that if one of them smacked into you on a zebra crossing it'd probably bounce off" but he's more scared of "some goon in a pickup or a harassed HGV driver." "For some time to come, self driving cars will be the new concept cars," he predicts.

Steam for a little longer

Remember the Steam Machine, Valve's alternative to the big-name consoles? Well you can forget about them for a while, because they've been postponed to 2015. Maybe Valve's planning to ship them with Half-Life 3.

Apple's planning to embrace the internet of things in a big way, with iOS devices becoming the centre of your automated home. What will that be like? We have some predictions, including amazing in-car entertainment and faintly frightening toilets.

Bring on the Babel Fish

Good news for Hitchhiker's fans: the Babel Fish is coming, and you won't need to stick anything in your ear. Microsoft is demoing "near real-time" language translation for Skype voice calls, and it's no pie-in-the-sky concept: a beta's due later this year.

OnePlus One is woo!

Apple and Samsung should be worried: our OnePlus One review says the super-cheap smartphone is "amazing", says Jon Mundy. It offers a "performance to price ratio [that's] one of the most impressive we've ever seen in a smartphone, offering Samsung Galaxy S5 performance for less than half the price."

Ever wondered why Google+ hasn't quite set the world on fire? Google co-founder Sergey Brin says it's all his fault because he's "kind of a weirdo". With hindsight, Brin reckons that he's "not a very social person", and shouldn't have been allowed anywhere near anything social. Still, we're sure his net worth of around $30 billion will cheer him up a bit.