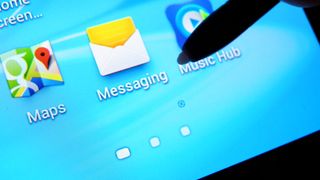 It's been half a year since Japan Display introduced its 543ppi smartphone screens - meaning it's about time rival screen maker Sharp upped the ante.

Sharp's newest innovation is a 600 pixel-per-inch, 5.5-inch smartphone LCD panel, which will be followed up by 7- to 9-inch versions for tablets, according to Japanese site Nikkei.

Sharp is claiming these ultra-dense screens will enable 4K media playback, though that likely only applies to its tablets. As Android Authority points out, 4K on a 5.5-inch screen would require 800ppi, a milestone that has yet to be reached.

Screens get bigger, pixels get smaller

Whatever phones these displays find themselves in are going to look quite impressive, though some argue that at a certain point denser and denser screens don't make much of a visible difference.

Of course for a larger-sized tablet screen "dense" means something like that display's 438ppi, which is 200 pixels-per-inch higher than the iPad Air's but still significantly lower than the best smartphone screens.

Beyond these ultra-high-density displays, Sharp is also reportedly keen to put its more efficient (but 300ppi-capped) LCD IGZO panels in more mid-resolution devices, a welcome focus for smartphone users who are OK with actually spying a pixel now and then.