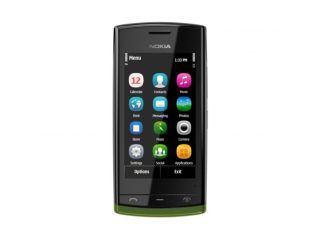 Nokia 500 - the start of something beautiful

Nokia has decided to take the unusual step of changing the way it names its phones AGAIN in a bid to make it easier to understand the difference between each model.

Essentially, the days of letter preceding a number to denote a certain type of handset are gone, a move Nokia says shows it's going to 'stop telling users what to do with their phones' - so we have no idea what do with the new Nokia 500, which seemingly couldn't be more middle of the road.

"Perhaps you use your Eseries business smartphone mainly for games or IM-ing friends? Maybe you're crunching numbers on a spreadsheet using an entertainment-focused Nokia X7?

"That's up to you – the classifications were indicators, but often, they didn't match-up to what people were actually doing with their phones."

Think of a number, multiply it by 9

So here's the potted version of how things will work going forward: the first number of the three will represent the price, so 100-series phones will cost the least, and 900-series the premium.

The following two numbers should simply be the progression of the phones through the series - it will be interesting to see which number hits its 99th iteration first.

So come on conjecturists, let's start stabbing in the dark - what number would you give the Windows Phone range? How awesome/anti-climactic will the Nokia 999 be? Let us know over on Twitter, where the phones team are tweeting @TR_Phones.