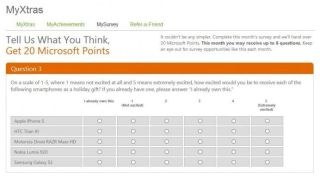 Time for another Titan?

An Xbox Live Rewards survey may have just revealed a third Windows Phone 8 offering by HTC, the Titan III, leading us to wonder if the Taiwanese phone maker might not be saving the best for last.

In a monthly questionnaire that asked Rewards participants how excited they would be to receive certain smartphones as a gift, one of the phones named was this unreleased HTC handset.

The Titan III was innocuously mixed in among devices like the iPhone 5, Droid Razr Maxx HD, Lumia 920 and Galaxy S3.

Though HTC has a Titan II on the market, the III may also be the previously rumored HTC Zenith.

Named among the HTC Rio and HTC Accord (which were eventually released as the Windows Phone 8S and Windows Phone 8X), the Zenith was to be the marque WP8 phone, one due out later than its predecessors.

The Zenith cropped up mid-summer and was said to house a 4.7-inch 720p Super LCD 2 screen and quad-core Snapdragon processor, a chip that trounces the 8X's 1.5GHz dual-core.

An 8MP camera - the same found mounted in the Windows Phone 8X - and 42Mbps HSPA+ were also rumored features for the phone, which, if it's ever released, would be HTC's top-end Windows Phone 8 handset.

The addition of the third "I" could very well be a typo by the Xbox Live Rewards crew, though the Titan II debuted early last year and hardly fits in the new-phone time frame of the other gift options.

While we probably won't see it before 2012 punches out, there stands an excellent chance HTC is waiting until the Consumer Electronics Show (CES) next month to unveil the Titan III.

TechRadar asked HTC to respond to the Titan III post and was told the company cannot comment on rumors and speculation.

Until we know more about the Titan III (or a possible over-anxious typer over at Xbox Live) check out our CES 2013 hub page for all the latest rumors, reports and news for the Vegas show.