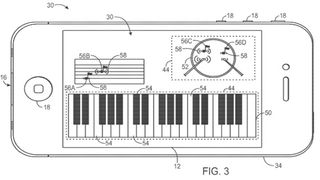 The "Electronic Devices With Gaze Detection Capabilities" patent lays out several benefits for iPhones and iPads capable of detecting when a user is looking at the device.

"When the device detects that the user has looked away from the device, the device may dim a display screen and may perform other suitable actions," indicates the U.S. Patent and Trademark filing.

In addition to battery-saving benefits, the capability could regulate video playback for only the right, eyes-on-the-screen moments.

Patent for a pressable, flexible display

"[It's a] force detection system that detects force exerted on a flexible display based upon changes in resistance and/or capacitance," reads the patent's abstract.

Such pressable, flexible technology would allow the company's two-dimensional multitouch screen to add a third dimension in the form of a z-axis.

The best real-world example of this new screen technology being used in an app comes from the patent's GarageBand example. The virtual keyboard would be able to detect how loudly notes should be played.

All of a sudden, the ability to play chopsticks on a virtual piano may have just gotten a little more advanced beyond the original iPad mini commercial.