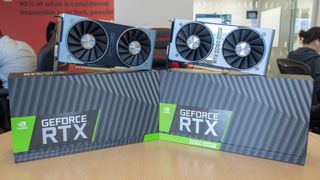 But, are those super-powered upgrades worth the cost? If you have yet to get into the Nvidia Turing line of Nvidia graphics cards, then absolutely – the “Founders Edition” models of these cards cost exactly as much as the cards available before July 9. If you’re already on board with an RTX card, particularly the RTX 2060, then the proposition loses a bit of its luster.

However, this is the most affordable upgrade to your RTX 2060 that you’ll likely see for a long while, so consider that as we go over the specific differences between this new card and the one that it succeeds.

Finally, the brand-new card has a base processor clock speed of 1,470MHz and a boosted speed of up to 1,650MHz. Last year’s card starts at a noticeably slower 1,365MHz and tops out at 1,680MHz – narrowly faster than this ‘Super’ card. We imagine this discrepancy is due to heat management concerns.

Now, we’ve yet to have the chance to fully test the RTX 2060 Super with our gamut of benchmarking tests. However, we have used it to play a few games with ray tracing, Deep Learning Super Sampling (DLSS) and the highest detail settings enabled at 1440p resolutions.

In that testing, we found the latest Metro Exodus to play at between 50 and 70 frames per second (fps) and Shadow of the Tomb Raider to hover between 60 and 70 fps. Flashing back to our RTX 2060 review of 2018, we generally saw much lower – but still playable – frame rates of between 40 and 45 frames per second at the same settings and resolution.

Granted, this could in part be due to optimization patches issued by these games’ developers since their release, but this is a marked improvement that can’t be entirely attributed to savvy optimization.

Conclusion: which should you buy?

If you’re just coming into the RTX line of Nvidia graphics cards, and you’re prepared to spend at least 350 bucks or quid on a part, it’s really a no-brainer to save or scrounge up another 50 and go for the RTX 2060 Super. This pricing is likely by design on Nvidia’s part.

The amount of additional performance and future-proofing here you’re getting for the cost of another PC game can’t be overstated. If you’re on a mighty tight budget but crave ray tracing, then go for the RTX 2060 that will likely be even cheaper with aftermarket options. Otherwise, save up another 50 bills and grab this new hotness.