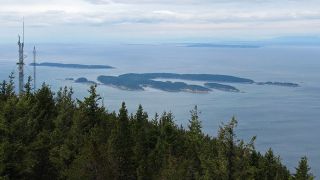 In late 2013, the residents of Orcas Island were fed up. Their broadband, provided by CenturyLink, was slow and prone to outages that lasted several days at a time. So they clubbed together and decided to build their own ISP.

Now, that homegrown network serves 50 homes on the island, has no monthly data cap and has boosted both bandwidth and reliability considerably. Ars Technica's Jon Brodkin has written a fantastic breakdown of how they made it happen.

The islanders used radios scattered across the island to spread connectivity, with some even hung in trees. Google Earth and wireless drones were used to map out the paths over which the signals could travel, and a central water tower was used as a connection point to the mainland.

The total cost was about $25,000 bankrolled by one anonymous resident who provided it as a three-year interest-free loan. Residents paid $150 to become members, and then $75 a month for service - which goes towards paying off that loan, as well as the bandwidth costs.

There have been a few issues with people hogging the bandwidth, but in most cases that can be solved simply by chatting to the troublemaker who often isn't aware they're causing a problem.

"We monitor all the connections and if someone is using a lot of bandwidth for a long period of time, we talk to them and figure out what they are doing," said Chris Sutton, who founded the scheme.

He added that other people have asked him to set up networks for them. He's declined but offered to teach them how to do it. "I think relying on corporate America to come save us all is just not going to happen," he said, "but if we all get together and share our resources, communities can do this themselves and be more resilient".

You can find the full details of their network and how it was constructed over on Ars Technica.