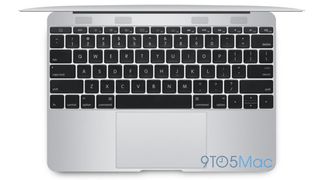 An artist's rendition, not an official image, of the alleged new MacBook Pro

The next iteration of Apple's MacBook Air will be a major overhaul to the usual design, according to one new report.

Sources allegedly from within Apple told 9to5Mac that the 2015 MacBook Air will be a 12-inch laptop that's significantly smaller than current 13-inch versions and narrower than the current 11-inch MacBook Air, though also slightly taller.

But more importantly it will reportedly do away with standard features like USB inputs, microSD slots, and even Apple's own Thunderbolt and MagSafe ports.

Instead the new laptop will allegedly feature only a headphone jack and a USB Type-C connector that will serve as many purposes as possible, including providing power and sending signals to displays.

The new MacBook Air's speakers, trackpad and keyboard have reportedly all been redesigned as well, with the keys now butting right up against the laptop's edges and sitting closer together overall.

The trackpad is slightly larger and sits closer to the keys and the bottom edge, and it lacks any physical clicking feel, which apparently helped make the new MacBook Air even smaller. And the four speaker holes that now sit above the keyboard reportedly double as ventilation.

The new MacBook Air will allegedly launch toward mid-2015 or possibly even sooner, and some details may change between now and then, the site says.