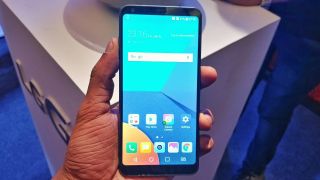 LG today rolled out the G6 in India, adding to the list of flagship smartphones launched in the country. The LG G6 will face a direct competition against the Galaxy S8, which was also launched in India last week.

It is launched at a price of Rs. 51,990, which is fairly cheaper when  compared to the Galaxy S8. Having the benefit over its price, will the  G6 turn out to be a tough competitor?

It is too early to give any conclusion. Lets take a quick look at the  device for now and give it some time before we come up with the final  verdict.

Apart from the extensive display size, LG G6 also has Dolby Vision certification. This means the G6 can display videos with HDR (High Dynamic Range). In simple words, the videos on this display will contain a lot more vibrance and details when compared to a basic display. Amazon and Netflix both offer HDR ready content, but both will need to roll out app-updates to allow the phone to play HDR content.

During my hands on experience, the display looked rich in colours, brightness and can be viewed from extreme angles. The touch response is also pretty smooth.

There is no doubt that LG has done a great job in the design department. It’s not easy to fit a 5-7-inch display in such form factor. One handed operation is no more a task on such huge display, and accidental touches are minimal despite of the thin bezels.

The rear panel is protected by Gorilla Glass 5, whereas the front has Gorilla Glass 3 protection. Most of us know that every smartphone with a glass body is a fingerprint magnet but the G6 is not as prone as the S8. The frame is made up of good quality metal that feels solid and looks premium. There are slight curves on the back panel, which makes it feel smooth and comfortable in hand.

Like most LG flagships, the fingerprint sensor is baked on the back, which also acts as a power/lock key. Another positive change done to the G6 is the removal of the camera bump, which allows it to lay down flat on table without scratching the glass.

To catch up with the competition, LG has added the IP68 certification to make it dust and water resistant. This addition will count as a huge positive over the predecessor.

The LG G6 runs on Android 7.0 Nougat out-of-the-box with LG UX 6.0 on top. During my limited usage, the UI felt smooth. I opened multiple applications to test the transitions and animations, but the smartphone did not stutter during the hands on.

When you first look at it, it seems like Android Vanilla but it’s because LG has tweaked with the notification panel, and design touches in the menu and other options. The company has also added some features dedicated to the FullVision display,

The UI is very distinct when compared to the stock UI, but those who prefer high customisation will like this software. There are a number of bloatware apps that come pre-installed, and most of them are non-removable.

The LG G6 comes packed with three cameras—two 13MP sensors on the back and a 5-MP camera on the front. We have seen a similar inclusion of camera sensor on the LG V20 and LG G5 as well. Out of the two rear cameras, one comes with a 125 degree wide-angle lens and f/2.0 aperture, while the other one has f/1.8 aperture for normal shots. The front camera has a 5MP sensor with f/2.2 aperture and 100 degree wide-angle view.

The camera samples came out to be pretty impressive in low light  conditions. I did not get a chance to play with the camera for very long  but I tested the basics of the camera in detail. The best thing about  the camera is its wide-angle camera to give you an immersive GoPro like  shot from your smartphone. The normal lens has quick autofocus and the  image processing is also impressive in almost every case.

Selfies look decent in well lit areas but loses details in low-lit  areas. We will be doing a covering more nitty-gritty of the G6 camera in  our full review.

Also Read: The LG G6 is poles apart from the LG G5: Here's why

LG G6 comes with some proprietary features from the company like the  Quad-DAC for immersive audio output, Google Assistant out-of-the-box,  all new camera modes like Snap-shot, match-shot guide shot to enhance  the photography experience.

It has a 3,300mAh battery with Qualcomm Quick Charge 3.0 and also has a heat pipe to reduce heating on its smartphone.

LG G6 is undoubtedly a good comeback after the failure of the G5. The company has filled up the pot holes which were left open in the predecessor, and also took away the modular design. The major overhaul is in the design and display department, which are the key highlights of this smartphone. When it comes to performance, its still needs to be tested before we form a verdict.