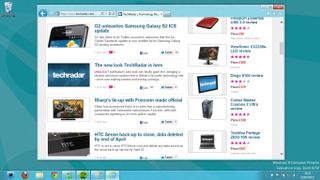 Microsoft's Internet Explorer 10 browser is more secure than any of its rivals in terms of protecting users from harmful downloads, according to new research.

A study from NSS (pdf) said IE10 blocked considerably more malware downloads than Google Chrome and wiped the floor with Apple's Safari and Mozilla's Firefox as well as the Opera browser.

Using active malicious URLs on Windows 8 machines, Microsoft's browser was able to block 99.96 of malware downloads before the user's anti-virus software is even called into action.

After IE10 and Chrome, there's a big drop off with Safari blocking 10.6 per cent of malicious downloads, Firefox stopping 9.92 per cent and Opera keeping out a paltry 1.87 per cent of the bad stuff.

Microsoft's advantage comes through its reputation-based URL and application protection systems, which wipe out an overwhelming majority of potentially harmful downloads.

Google has a "download reputation" system, which keeps Chrome well ahead of those browsers that rely simply on its URL reputation scores to prevent malicious software being downloaded by users.

"The net result is that IE 10 users are offered superior protection over Chrome users with one quarter the risk of making a bad download decision. Firefox, Safari, and Opera users are afforded little protection at all by their browsers."