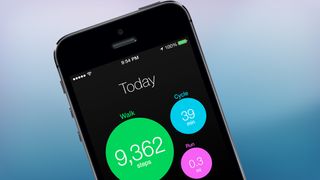 She likes to move

Updated: Users of the Moves app were concerned when the privacy policy was updated to add that it would, after all, share information with Facebook. But it wasn't very specific about what data would be passed over to the social network.

However, Facebook has confirmed that the sharing won't be as sinister as some of you may have assumed. Your data will merely be sent to Facebook staffers so they can "actually work on building the app".

But that's where it'll end. Facebook said it has no plans to carry over any of your Moves data to your Facebook account - so nothing will be used for adverstising purposes.

When Facebook announced that it was buying Moves earlier this year, privacy pundits we aghast at the idea of the social network devouring all your biometric fitness data gathered by the tracker.

But the two companies promised not to "commingle" data and that Moves would continue to operate as a stand-alone app.

Now, however, Moves' user agreement has been updated and speaks of sharing information "including personally identifying information" with its affiliated companies - "including but not limited to Facebook."

The company says that sharing your data will "help provide, understand and improve our services" but it makes no mention of what's in it for Facebook or what it could be getting up to with the knowledge of when you're running, walking, biking, driving or sitting still.

It seems likely that Facebook would use knowledge of your motions to provide more targeted advertising in your news feed. And if you don't like it, you'll have to stop using Moves.