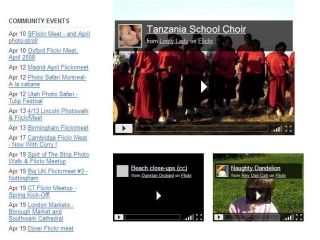 Flickr has added a new video-sharing feature to its popular image-hosting site.

Anyone is able to view uploaded content, including non-Flickr members, although only Flickr Pro members will be able to upload videos.

Videos will be displayed in non-specific searches, just like their still image counterparts and can be played in the embedded Flickr video player.

Group administrators will be able to specify whether videos are allowed into the group's photo pool and also have the power to remove videos.

No doubt mindful of a potential backlash from the site's core artistic community of enthusiastic and professional still-image photographers, Flickr has presented the concept of videos on Flicker as a series of 'long photos', with an upper time limit of 90 seconds per video.

Of course, it could be argued that this is to save bandwidth as much as to promote creativity, but we'll give Flickr the benefit of the doubt. It does look to us as though it's thought long and hard about the best way to proceed.

In any case, it seems highly unlikely that the move to incorporate videos will result in Flickr becoming yet another sub YouTube clone. Never mind the site's owners – most Flickr members simply wouldn't stand for it.