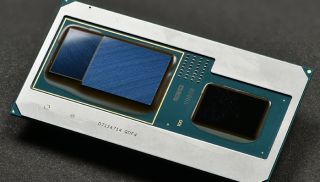 Intel has shown off its new collection of 8th-generation Core processors, and these CPUs are particularly notable because they feature discrete graphics technology by AMD, Intel’s longstanding rival.

While this rare collaboration between Intel and AMD piqued our interest when it was revealed last year, the new information provided by Intel shows just how exciting these new processors could be.

The new Core processors are Intel’s first CPU with discrete graphics included in a single package, allowing for incredibly thin and light laptops and PCs that are able to provide impressive gaming performance and 4K media streaming.

These chips also contain a number of other firsts. According to Intel, they will be the first example of power sharing across CPU and GPU, the first consumer mobile chips to use HBM2 (the second-generation high bandwidth memory, a faster type of graphics memory), and the first consumer solution to use Intel EMIB.

EMIB stands for Embedded Multi-die Interconnect Bridge, which combines several separate components onto a single package (such as CPU and GPU), and allows for high-speed communication between the two.

According to Intel, it also reduces the silicon footprint by over 50%, allowing it to be used in much thinner and lighter devices. The CPU and GPU are now just 1.7mm thin, and when compared to previous chips, which had discrete chips for CPU, GPU and memory, the new EMIB takes up far less room on the motherboard.

In the breakdown of the chip (seen above) you can see where each component resides, with the 4GB of HBM2 sitting next to the custom Radeon RX Vega M graphics chip, and the 8th generation Intel Core processor sitting slightly further away, connected to the GPU via eight lanes of PCIe 3.0.

The new processors are all quad-core chips with eight threads, support for two channels of DDR4-2400 memory and Intel HD 630 graphics (for less intensive graphical tasks).

Next is the Intel Core i7-8709G, which features very similar specs to the 8809G, but has a slightly lower maximum processor frequency (4.1GHz), and does not allow for discrete GPU and HBM overclocking.

The Intel Core i7-8706G follows, with the same base and maximum processor frequencies as the 8709G, but this time includes the Radeon RX Vega M GL for discrete graphics. This has 20 compute units, 1,280 stream processors, 1.4Gbps memory interface data rate, 179.2GB/s memory bandwidth, a base clock of 931 MHz and a boost clock of 1,011 MHz.

The Intel Core i7-870G is next, and has broadly the same specs as the 8706G, but doesn’t include Intel TSX support or Intel vPro technology, which the 8706G does.

Finally, the Intel Core i5-8305G features a maximum frequency of 3.8GHz, with a base clock frequency of 2.8GHz and, unlike the other chips, doesn’t support overclocking in any form.

Intel also shared more information on the GPUs, both the discrete Radeon RX Vega M, and the integrated Intel HD 630, as each of the new 8th generation processors contains two graphics subsystems.

The discrete Radeon display engine supports up to six displays and 4K resolution, and outputs from a Display Port 1.4 with HDR support, and a HDMI 2.0b with HDR10 support. It has up to 24 compute units, supports Vulkan and DirectX 12 graphics APIs and can encode 4K footage at 60fps (frames per second), along with HEVC and H264 encode and decode.

Meanwhile, the integrated Intel Gfx display engine supports three displays, up to 4K resolution, VP9 and HEVC 10b encode and decode, and H264. This lower-powered graphics subsystem is therefore useful for watching media and doing non-demanding graphical tasks, so battery life isn’t depleted as quickly, while gaming and graphic intensive tasks are left to the Radeon subsystem.

Intel also provided benchmark results to show the performance benefits of the new chips. While we’d rather test the chips ourselves using our own benchmarks, the ones provided by Intel at least give us some idea of what benefits the new chips will bring.

The chip was also compared to a system with a Core i7-8550U processor and Nvidia GTX 1050 (4GB) GPU, and it performed 1.3 times better in the 3DMark 11 graphics benchmark, with an average frames per second of 46fps in Hitman (compared to 33fps), and 36fps for Deus Ex: Mankind Divided (compared to the GTX 1050 system’s 27fps).

An 8th generation Core processor with the Radeon RX Vega GH graphics was also compared to a three-year-old system with a Core i7-4720HQ CPU and Nvidia GTX 960M GPU, with it scoring 2.7 times higher in the 3DMark 11 graphics benchmarks, along with 2.7 times better fps in Hitman, and twice the fps in Total War: Warhammer.

So, it looks like the new 8th generation Core processors from Intel could bring better gaming performance to thinner and lighter gaming laptops. This is very exciting stuff, and we’re looking forward to testing out upcoming devices that use the processors soon.