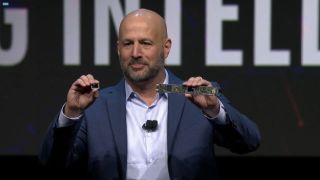 I want this, but, like with a desktop processor. (Image credit: Intel)

CES 2020 could have been the perfect chance for Intel to show the world that it still means business when it comes to desktop CPUs. AMD processors like the Ryzen 7 3700X have basically made Intel's 9th-generation Coffee Lake Refresh lineup completely irrelevant, so I was kind of looking forward to Intel having a strong showing at CES to at least put up a fight.

That is basically the opposite of what happened.

Instead, Intel wasted most of its time talking about smart cities, the Red Cross and football. This is all definitely cool and important work that Intel is doing, but I couldn't help but feel that Intel totally forgot that this was the Consumer Electronics Show.

When Intel finally did get around to actually talking about products that matter for the average consumer, it only did so in vague teases. It teased Tiger Lake, but didn't give any specific specs. It showed Destiny 2 running on a mobile-class Intel Xe discrete GPU, but didn't give any other information. CES 2020 is the biggest tech show of the year, and Intel just gave us vague teases of future products.

Intel can't afford to do that

Offering some vague teases of upcoming products isn't even necessarily a bad thing. There are certain hardware manufacturers that could show up, briefly hint at a product and call it a win. But, to pull that off, the company has to be playing from a position of strength.

Intel is still making boatloads of money in its enterprise and mobile markets, and that's probably not going to stop any time soon, so it's definitely not weak. But in the consumer desktop space, saying that Intel hasn't been having a good time is kind of an understatement.

Intel has been taking a lashing from AMD in desktop computing for more than a year now, and it still hasn't given us a significant answer to AMD's third-generation Ryzen processors. Where Intel was on the top of the CPU world just a few years ago, it's now on the bottom, and the more time passes before its next major platform launch, the weaker its position gets.

The fact that Intel had to lower prices on its HEDT chips by half when its 10th-generation Cascade Lake-X lineup launched in November should be another sign that Intel knows it's lost the upper hand. And while we're still working on our full review of the Intel Core i9-10980XE, we can confirm through our own testing that it fails to topple the Ryzen 9 3950X, which is both cheaper and is on a less expensive platform.

So, that leaves me to wonder whether or not the consumer desktop space is even a priority for Intel anymore. In fact, I found it particularly odd that Intel would give such a vague tease for Tiger Lake, the follow-up to a laptop platform that hasn't even been in laptops for six months yet, while failing to mention a follow-up to Coffee Lake Refresh at all. Instead, Intel seems content to throw shade at AMD's processors instead, according to this report from PC Gamer.

So, where does that leave Intel?

Intel will never admit it, but it could be that it's willing to just wait things out and let AMD claim the consumer market while it just rakes in the cash from the enterprise laptops and its Project Athena-verified laptops (which are awesome!) This is all just me speculating of course, and Intel would never admit to it, but that's how it feels, that's how it looks and that's simply the reality we're dealing with right now.

There are simply too many rumors about Intel 10th-generation Comet Lake-S processors to simply write them off like they'll never come out, I know that. But the fact that Intel seems to be treating them like they're a low-priority item not worthy of the biggest tech show of the year is pretty damning.

Simply put, I'm just a bit disappointed with Intel. When AMD put out its first generation of AMD Ryzen processors, I thought it would create this renewed competition in the desktop processor space with AMD pushing Intel and Intel pushing right back. Where we're at right now, however, makes it seem like AMD is pushing Intel and Intel is just sitting there and taking it, with maybe a snide comment thrown in occasionally for good measure.

I have given Intel a lot of flack over the last few months, and while it might seem like I'm rooting for Intel to fail, I want exactly the opposite. Growing up, I had Intel processors in every single system I built, and it wasn't until Ryzen 2nd Generation that I made the switch to Team Red. If Intel comes around and releases a fire processor, you can believe that I will be the first person singing its praise.

Until then, though, we're stuck with what Intel is willing to give us and if you're a desktop computing enthusiast – that's a big, fat "nothing".