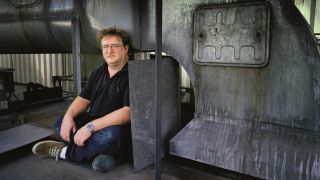 Valve's Gabe Newell thinks Abrams is right for the job

Does J.J Abrams have no fear of disappointed fanboys? He's already signed up to direct Star Wars: Episode VII, and now he's confirmed his involvement in bringing two of Valve's most popular gaming franchises to film.

He's on board to make Half-Life and Portal into movies, and while both are in very early stages at the moment, he's excited at the possibilities.

"It's as real as anything in Hollywood ever gets," Abrams told Polygon. "Which is that we are really talking to Valve, we are going to be bringing on a writer, we have a lot of very interesting ideas."

And fans can rest assured he won't make the mistake of some game-to-film adaptations, as both projects are close to his heart. "Both a Portal and Half-Life movie are things I want to see," he said. "We're also aware of the cautionary tale of movies that became games and vice versa.

"Our goal here is to treat the world Valve has created in both these properties like anyone would a book or some great story that comes from a pitch or original script - just to treat it with the respect they treat their games and their players with."

Valve co-founder Gabe Newell has resisted making either game into a film until now because he didn't feel the ideas were there. But after talking to J.J. Abrams about storytelling, he said, "We reached the point that we decided to do more than talk."

Valve is also working on its own gaming PC. Known as the Steam Box, it'll play games made for Valve's Steam service, and is designed to sit in the lounge alongside consoles, unlike a traditional PC. It's certainly more of a looker than your standard tower PC.