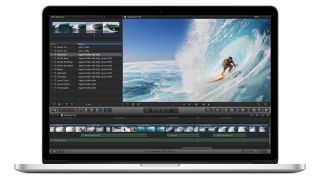 Should Apple introduce high-res displays on all Macs?

Apple is not the innovative force it once was, according to one industry analyst who has criticised the company for failing to launch touchscreen Macs.

Global Equities Research analyst Trip Chowdry said Apple had pioneered touchscreens and high-resolution displays, but had missed a step by failing to push these innovations to its entire computing line.

Despite record demand for Apple products, Chowdry wrote in a note to investors: "Apple's innovation is sputtering."

"Why is that Apple, the company that brought touch to phones and tablets, stopped just there and did not bring touch to notebooks and iMacs?

The company has, of course, just recently brought the Retina display to the 13-inch and 15-inch MacBook Pro models, but has resisted calls for it to launch a touchscreen iPad / MacBook hybrid.

Chowdry's comments come just a day after Apple revealed it had increased research and development spending by 39 per cent (up by $1B / £600M) for the financial year ending September 2012.

The spending remained at a flat, 2 per cent of the company's total sales, but if Apple's innovative flair is suddenly lacking, it's not through a lack of investment.

Chowdy also stated that recent missteps like the incomplete Maps apps, which reportedly led to the impending departure of executive Scott Forstall, may signify a lack of efficient planning at One Infinite Loop.

He added: "Our contacts speculate that Apple executive leadership may have rushed Scott Forstall to deliver products prematurely.

"This may also indicate that Apple may be lacking a three to four-year product road map, because if a roadmap existed, engineers would not be pushed to ship products prematurely — especially when they are not fully tested."

While there's a chance he may be correct regarding 'rushed products,' criticising Apple for its conscious decision not to introduce touchscreen computers is a little more contentious.