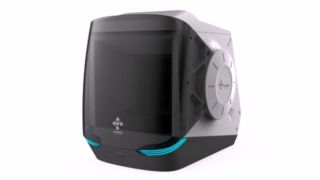 3D printers are dropping in price, with options like the Ooznest PRUSA i3 on the menu these days, but an even cheaper device is hoping to make 3D printing more affordable still.

And the Rever, which has just fired up its Kickstarter campaign (as spotted by Creative Bloq), wants to be in every home and usable by the whole family – meaning it's a far cry from the usual messy and often relatively complicated 3D printers which are on the market.

The maker Qubea claims that the Rever is easy to use, and indeed simple enough for children to get to grips with, and of course given the latter fact it's also designed to be safe.

Novices and kids can use the Rever app for iOS and Android tablets and phones to knock up a quick design for a model – the Qubea cloud platform boasts thousands of premade designs which can be used directly, or as a starting point to be modified – and you can fire up the printing process directly from the app wirelessly.

If you use the Rever chipped filament in the printer, the software also automatically sets variables such as speed, temperature and so forth, meaning that 3D printing novices will be able to create things with a minimum of fuss.

The machine also caters for potential errors such as if there's an object that has been accidentally left on the printing platform – it has an infrared system which can detect such obstacles and warn the user about them.

The Rever sounds pretty fool-proof in this basic mode, but if you're more experienced in the world of 3D printing, you can hook the printer up to your PC and use any third-party software you wish and whatever filament you want.

As far as safety goes, the Rever has a see-through safety door which is locked during printing, yet still allows children to see the print process happening – the door will only open when any potentially dangerous parts of the printer have been locked away.