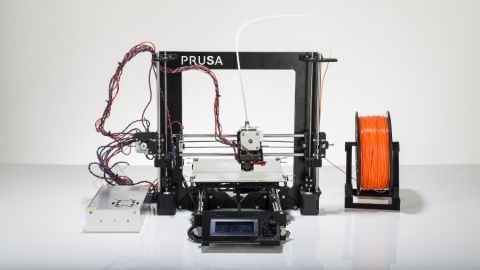 Building the kit-based PRUSA i3 could be challenging depending on your ability, but the end result is a 3D printer with a print quality that easily matches many other FDM printers at twice the price.

Forget the glossy professional finishes of the latest 3D printers, the Prusa i3 is all about going back to basics and understanding where and how 3D print technology evolved.

This Ooznest kit is based on the popular Prusa i3 design and along with the latest stream of FDM printers such as the Lulzbot Mini, they all stem from the original RepRap project by Adrian Bowers, a professor at Bath University. His RepRap project aimed to create a machine that could replicate itself and would be able to make useful goods for the person who built it, so creating a symbiotic relationship.

The project itself is open source so anyone with a bit of knowledge or determination can build a RepRap inspired printer for around £350 or $450 (around AU$630). Not too shabby indeed. Of course, being open source the original RepRap plans have been taken and adapted, so many companies such as Aleph Objects have been able to produce their own superb range of printers based in some part on those designs.

In fact if you have the time you can download the Lulzbot plans along with all the source files to print the plastic parts, and you can then print out your own set of parts to build your very own Lulzbot.

The Lulzbot is a commercially available printer and while it is possible to follow the plans to build your own it can be a tricky. There are a few modifications to standard parts and the instructions can be a little vague, but then again they've put a lot of time and effort into fine tuning the original design into something that they are proud of and is commercially viable.

If you do want to build a printer from scratch then at present the most recognised update to the original RepRap design is the Prusa i3.

However, once you actually get started and take a look at building your own it quickly becomes apparent that it really isn't as easy as it seems. Firstly you'll have to spend hours tracking down all the parts that you need to build it – these parts in themselves aren't particularly expensive individually, but add postage and import duties and the price really starts to mount up.

Even then once you've gathered together all of the mechanical and electronic parts to build the Prusa i3 there's still a large selection of parts that need to be printed in plastic, with a 3D printer. So in order to make a 3D printer for cheap you need to have a 3D printer, or failing that a workshop and a whole bunch of tooling.

It is therefore much easier to buy a 3D printer kit such as the Ooznest Prusa i3, as if you take this route the hard work of sourcing the parts has been done. The full list of parts needed to build a Prusa i3 can be found here if you're interested and here's the original project.

Ooznest isn't the only firm out there that currently offers a Prusa i3 kit and it's certainly not the cheapest, but what becomes very evident once the kit arrives is that the guys at Ooznest really know what they're doing.

The kit costs £450 (around $690, or AU$970) and arrives in a large cardboard box, inside of which you'll find a further selection of smaller boxes all carefully labelled and tagged with the contents. Each box of parts is referred to in the build instructions, so as long as you keep it organised then the construction of the printer is relatively straightforward and no more difficult than building a Lego kit.

The instructions for the build are all located on the Ooznest website and are downloadable as a PDF, so you can actually see what's required from you before you buy the kit, and you can also check out whether you think you're up to the build prior to purchasing.

Current page: Introduction and the kit

Next Page Constructing the printer