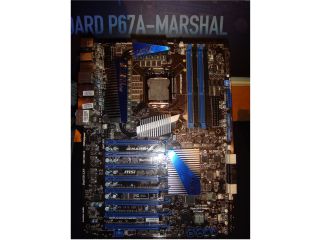 Aside from the usual trappings of a top-end MSI motherboard, such as the Military Class components and the impressive OC Genie tech, it's also got a headline-grabbing number of PCI-Express lanes, all purporting to be full x16 PCI-E 2.0.

It's the Lucid Hydra chip that helps make this possible. We've looked at Hydra-powered MSI boards in the past, such as the P55A Fuzion and the 870A Fuzion also from MSI, but they never really delivered on the promise of multi-GPU performance without the need for expensive SLI and CrossFire branding.

MSI isn't talking up that multi-GPU tech this time and is instead using the Hydra chip to act as a PCI-E bridge to allow more lanes to be added to this ludicrously lane-heavy board.

The NVIDIA NF200 chip could also have been used as a bridging chip, but speaking with an MSI representative he explained the Lucid chip was being used in instead as it offered higher thermal efficiency and hence lower temperatures.

Users can still utilise the chip's mix-and-match graphics vendor capabilities, though the MSI rep we spoke to was keen to point out that despite the ongoing driver development it wasn't going to be marketed based on that.

Indeed the board carries full SLI and CrossFire certification so you'd only really need it to operate power up if you wanted to keep hold of that older card and mix it with one from the opposite vendor.

There is a little confusion amongst some of the MSI folk we spoke to about the board though with one believing the board could operate four dual-slot cards in full PCI-E x16 flavour and the other claiming that wasn't possible and that you'd be looking at x8 only.

Still, the board has only just been launched so we can just about forgive them a little confusion in all the pre-show excitement.