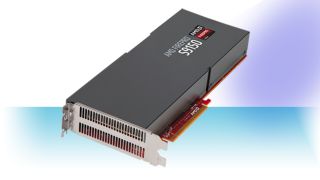 AMD is better known for its processors

AMD has launched its fastest server GPU yet, the FirePro S9150, one that is aimed at the supercomputing market where archrival Nvidia seems to have the upper hand with its Tesla K20X series.

Two of the top 10 supercomputers use Nvidia's solution while two others use Intel's Xeon Phi; AMD generally features poorly in the top 100 list.

The card reaches double-precision peak performance of 2.53 teraflops with Nvidia's K40 hitting 1.43 teraflops, 76 per cent higher. Single-precision PF on the FirePro S9150 is 5.07 teraflops while the K40 manages to reach 4.29 teraflops.

It's worth noting that the chip - which is fabbed using a 28nm process - uses a similar graphics technology as found in the Xbox One and the Sony Playstation 4 (i.e. GCN) as AMD provides the compute hardware for both gaming platforms.

The card will be available this quarter and will be offered by Supermicro, Asustek, Tyan and Gigabyte amongst others. Expect Nvidia to close the gap or even surpass AMD's offering soon with a new Maxwell-based product.