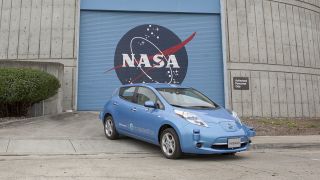 Google's self-driving cars are perhaps the best known of the breed but most motor manufacturers are now busy experimenting with the technology, and Nissan has enlisted the help of the National Aeronautics and Space Administration in its efforts.

The two companies have announced "a five-year research and development partnership to advance autonomous vehicle systems", working together on technology that will eventually find its way into commercial cars.

Somewhere down the line you could be riding in a self-driving, battery-powered Nissan developed using hardware and software perfected in a Mars rover. Similarly, what Nissan learns from building its Leaf and Infiniti models will help NASA in its explorations of the universe.

The pair will work together to test autonomous vehicles for transporting "materials, goods, payloads and people", with the first of the fleet up and running by the end of this year.

Nissan hopes to have self-driving cars that are able to navigate most road situations on sale within the next five years. "The partnership will accelerate Nissan's development of safe, secure and reliable autonomous drive technology that we will progressively introduce to consumers beginning in 2016 up to 2020," said Carlos Ghosn, Nissan's President and CEO.

So if you're always struggling to get your parallel parking right or even follow a sat nav, fear not - NASA is on the case. Nissan has previously said that software would work alongside human drivers to begin with, although eventually everything could be handled automatically.