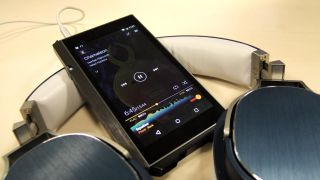 There was a time, around that of the iPod Mini, where almost everyone I knew would refuse to leave the house without a music player tucked into their pocket.

I was no different. My trusty Sony Walkman-branded MP3 player accompanied me everywhere, and even though its internal storage seems puny by today's standards it felt at the time as though it contained all the music I could possibly want to listen to.

Personally, I stopped using an MP3 player (or digital audio player / DAP as they're referred to in audiophile circles now) when I got my first smartphone. It might not have had the slickest interface, but it felt so much more convenient than carrying around two devices.

Apple still uses the iPod name alongside its Touch, Nano and Shuffle models, but it discontinued the iPod Classic in late 2014 to focus on these smaller form-factor devices.

Recently though there have been some interesting developments in the world of DAPs that mean that you might want to give them a look once again if you're looking to make the most of your portable listening.

Here's five reasons why you may want that second device back in your pocket...

Once you've delved into the world of high-end headphones, it's unlikely that your phone will be able to support their more advanced features.

There aren't any smartphones out there that support balanced headphone output, which offers an enhanced level of sound quality over their non-balanced equivalents, and Apple continues to refuse to build Bluetooth AptX support into its iPhones.

Meanwhile many DAPs, such as Astell&Kern's AK70, will include support for these features as standard.

Going beyond these features, high-impedance headphones require much more power to be driven properly. Most phones are unable to do this, but it's perfectly possible to find digital audio players, such as HiFiMan's HM-90I, that can drive them without issue.

...which aren't designed for portable listening

There's a reason why most phones don't support high-end headphones. These headphones are bulky, and aren't designed for portable listening in the first place.

When it comes to open-back headphones you might find it impossible to listen to them while outside anyway because of the sheer amount of noise that leaks into them.

Most phones nowadays are stripping away as many of their buttons as possible in an attempt to be as sleekly designed as possible, but physical buttons are very handy when you're listening to music on the go.

Whether it's skipping tracks or just pausing them quickly to ask someone a question, dedicated buttons -like those found, again, on Astell&Kern's AK70 - can be very helpful.

Yes these are becoming more common with the proliferation of headphone in-line remotes, but if you don't want to upgrade your existing pair of headphones then you need some buttons on the device to make your life easier.

3. Its storage is dedicated to music...

If you've got a phone that's filled with the latest apps, games, and all those slow-motion videos that you've been meaning to back up and delete then it can be hard to find some space for your music collection.

A dedicated music player has storage that's reserved for music alone, and as such you can wave goodbye to having to micro-manage your folders to make room for your newest 24-bit find.

...but many phones offer expandable storage

Of course your storage problem can be massively reduced if you opt to go with a phone with support for external storage options in the first place.

MicroSD cards are getting cheaper and larger with each passing year, and a sensible phone purchase means that you can upgrade its storage to your heart's desire.

You'll still need to balance your music storage needs with all your other apps, but if you use your internal and external storage sensibly then there's much less cause for concern.

The situation has improved over recent years with the introduction of high resolution DACs into smartphones, but the vast majority of the devices are still limited to CD-quality audio.

Beyond high-res audio, MQA is the next big development in audio quality, and as it currently stands there isn't a phone in the world that supports the standard. Meanwhile Pioneer has already released a DAP that can play MQA files, the XDP-100R.

Hi-res audio might not offer the same leap in quality as we saw between SD and HD video, but it's a substantial improvement that can really sing when paired with the right headphones.

...but with the right accessories so can your phone

Your phone's internal DAC might not be able to support hi-res audio, but with the addition of an external DAC it might be easier than you think to get it upgraded.

The exact accessories that are compatible will vary from phone to phone, but using the iPhone as an example, you can buy a lightening to USB adaptor which will allow you to plug in a DAC such as AudioQuest's Dragonfly Red which supports hi-res music up to 32-bit.

Then it's just a case of making sure the music playing software you're using in the phone supports the correct resolution of file and you should be ready to go.

It's not quite as neat a solution as having everything built into a single DAP, but it might be an option if you don't want to carry around two devices.

5. It's not going to drain your phone's battery

On long flights and plane journeys I cannot live without music. Sure I might try and read a book, or play a game or two, but the thing I'm going to return to time and time again is my music, which I can listen to no matter how travel weary I am.

But if I'm on a long journey then there's a high chance that I'm going to need to use my phone at the other end, be it to phone the person I'm meeting or else find my way using Google Maps or CityMapper.

This can often leave me conflicted. I want to listen to music, but I need to keep an eye on my phone's battery lest it die before I reach my destination.

A DAP is great in this regard, because I know that no matter what happens my phone battery is safe. I can listen to music until my audio player's battery completely dies and still have enough juice left in my phone to order a cab at the other end.

It means that you can enjoy your music without having to worry or ration, and that can make all the difference on a stressful journey.

Conclusion: There's still a time and a place for a DAP

It's unlikely that we'll ever see a return to the days of the original iPod where everyone carried their trusty MP3 player with them at all times.

But hopefully this list has proved that depending on how and where you listen to music that there still might be a reason to invest in a dedicated digital music player.