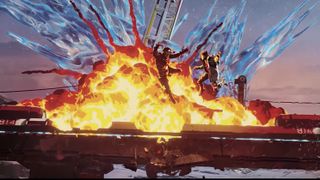 EA surprised many with the sudden announcement of Apex Legends back in February 2019, a free-to-play battle royale shooter that sees the publisher going toe-to-toe with genre mammoths PlayerUnknown's Battlegrounds and Fortnite Battle Royale.

Developed by Respawn Entertainment and set in the Titanfall universe, Apex Legends is a squad-based battle royale shooter where teams of three go up against 57 other players to try to gather loot and be the last person (or squad) standing.

However, unlike Fortnite and PUBG, Apex Legends sees players take on one of eight classes, each represented by a unique character (imagine Fortnite mixed with Overwatch and you’ll be on the right track.)

Apex Legends is getting ready to wrap up its third season, Meltdown, and players are now looking ahead to the launch of Season 4, Assimilation, on February 4 2020.

If you're new to Apex Legends and looking to see what you're missing or you've dropped off the map for a while and you'd like to catch up on the latest, we're here to keep you up to date on what's fresh in Apex Legends.

Apex Legends is an engrossing, revamped take on battle royale that as it stands cannot be beat for its attention, detail and care:

As we said in our full Apex Legends review:

"Truth be told, the Battle Royale movement has never quite grabbed me. I dabbled in PUBG and spent a dozen hours or so with Fortnite, yet nothing ever quite stuck the landing. Apex though, has got me hook, line and sinker. Featuring intuitive controls, an outstanding comms system and remarkable rogue’s gallery, Respawn has created what feels like the AAA outing for the genre."

Apex Legends' third Season is almost at an end and to celebrate this it's throwing a Grand Soirée. The event will run from January 14 until January 28 and will feature seven limited time modes as well as some new skins.

The seven limited time modes (some new and some old favorites will feature) are the real focus of this event and a new one will begin every two days with the schedule being as follows:

As well as the modes, there's a new prize track. Each mode will have three challenges worth 1000 points and players will be able to unlock new weapons and skins as they collect points. Taking part in every mode won't be necessary to get all the points but those who do will also get a special badge. Those who are short of points can take part in a special bonus scoring weekend from January 17 to 20.

To really get into the spirit of the party, players will be able to visit the Direct Purchase shop where they can pick up special Art Deco accessories and some special legendary skins which will rotate through the event.

Season 3 of Apex Legends will soon be wrapping up and on February 4 2020 Season 4: Assimilation will begin.

So what can we expect? Well, in a recent Dev Stream Respawn gave us some insights into the new Legend, weapons and Ranked Series that are on their way.

As with previous seasons, Apex Legends Season 4 will introduce a brand new Legend. This time, Forge is coming to the game. Described as the "exact opposite" of Season 3's Legend, Crypto, Forge is essentially a super-buff champion fighter with cybernetic enhancements. Respawn describes Forge as: "Confident yet humble, Forge uses his size, strength, and heavy-duty Shatter Gauntlets to batter his opponents into submission."

Forge is apparently sponsored by Hammond Robotics, a company already known by those familiar with the Titanfall universe.

Other than that, we don't know a huge amount about him just yet as his exact abilities are yet to be confirmed. Given his size and fighting skills, though, we're expecting Forge to be the kind of Legend who runs into the fray and gets up close and personal with his enemies. We're sure that his mechanical arm will come into play as well.

The Sentinel has been confirmed as the new weapon coming to Season 4 of Apex Legends. It's described as a powerful bolt-action sniper rifle which stands apart from other weapons of its ilk as it comes with a charge mechanic. In the dev stream, it was hinted that this mechanic will give players a little more decision making to do when making a shot and could provide some interesting gameplay.

In the Dev Stream above, it was confirmed that Season 4 will bring some map change to World's Edge but no specifics were revealed. It was teased that Hammond Robotics "might have something to do with" the alterations but nothing more was said.

Players have already started to notice (via GameSpot) that areas in the game are being marked out for future construction by Hammond Robotics, including an area between the Fuel Depot and Thermal Station.

As Season 4 is launching on the one year anniversary of Apex Legends, there's going to be a special event. According to Respawn, those who log into the game in the first week of Season 4 (that's February 4 to February 11) will receive an Anniversary Gift. this includes a Year 1 Origami Flyer charm, a Year 1 loyalty badge and 10k XP for your first match of the day for every day the event is running.

It wouldn't be a new season of Apex Legends without a brand new Battle Pass.

Like the others, this Battle Pass will be brand new for the Season and will bring with it 110 levels to climb by completing daily and weekly challenges, with more than 100 exclusive items including Legendary Skins, Apex Packs, Loading Screens and Music Packs to earn.

Alongside Season 4, Ranked League Series 3 is also going to launch.

Ranked League Series 3 is expected to bring a few changes including Splits and a new tier: Master Tier.

As Respawn is seeing more players move into the upper echelons of the rankings to become Apex Predators, it's finding that it's getting harder to "showcase the skill between any two Apex Predators this season." As a result, a new tier, Master Tier, is being added between Diamond and Apex Predator.

As far as Splits are concerned, after looking at the lengths of previous Ranked Series, Respawn has decided that Series 3 will be three months long, like Series 1, but that it will be divided into two Splits.

This means that Ranked Series 3 will essentially come with two parts, with Split 1 taking place on World’s Edge, while Split 2 will freshen things up by taking place back at King’s Canyon.

Soft resets will take place between each Split and Respawn has confirmed that "ranked rewards will be granted for the highest tier achieved in either split of the series, but exclusive animated badges will be granted if you can make it to the same tier both splits."

There will also be some new party restrictions as the game moves into the new Ranked Series. Players will find that once they get to Platinum Tier or higher, they'll only be able to party with players who have 1 Tier of difference from them. It's hoped this will keep matches more tight when it comes to higher skill levels.

Entry RP cost to Ranked Series will also stay the same and there won't be any further changes to the scoring system.

Apex Legends can be difficult to get to grips with. There are a lot of different characters each with their own abilities and skills, plus this battle royale arguably leans more heavily on strategy and teamwork than some of its competitors.

Get ahead of the pack with our selection of Apex Legends guides, designed to help you become a champion.

Apex Legends can be downloaded for free from the PlayStation Store, Xbox Store, Origin Store or Apex Legends website. Simply search for the title, download the game and enjoy!

But do keep in mind that a good internet connect and subscription to either PS Plus, Xbox Live or Origin Access is required to play.

The good news is that Apex Legends is also coming to mobile in the future, following in the footsteps of Fortnite and PUBG.

Now that Season 4's launch date has been confirmed for February 2020, we're reaching the end of the known world for Apex Legends. No doubt, in the coming months, Respawn will establish and reveal its new goals for the game's second year.

Is Apex Legends coming to mobile?

Yes. In EA’s quarterly earnings report, the publisher announced that it’s looking at bringing the Respawn Entertainment-developed game to mobile platforms and to both South Korea and China.

We shouldn't expect to see Apex Legends on mobile for at least a year, though. According to EA Chief Executive, Andrew Wilson, the game won't launch until the fiscal year 2021.