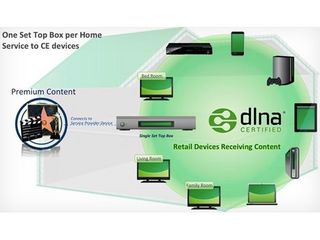 The Digital Living Network Alliance (DLNA) has added DLNA Premium Video to its existing standards, allowing protected films and other content to be streamed to any DLNA certified device.

DLNA-equipped devices can already access media including video and music on any other DLNA device on the same Wi-Fi network, making sharing media around the home relatively easy.

One DLNAPV device to rule them all

To benefit from the new feature, there must be at least one DLNA Premium Video device installed to act as a central hub for the other non-premium DLNA devices like tablets, phones, consoles and Blu-ray players that most people will already own.

So for example, you would only need one DLNA Video Premium set top box or PVR from your cable or satellite TV provider to be able to watch its paid-for on demand content in another room in the house.

Though at present it will require the purchase of at least one new device, some devices you already own may be upgradeable to Premium Video via a software update.

The DLNA has been demonstrating the new standard at CES 2012, but as yet no DLNA Premium Video certified devices have been announced.