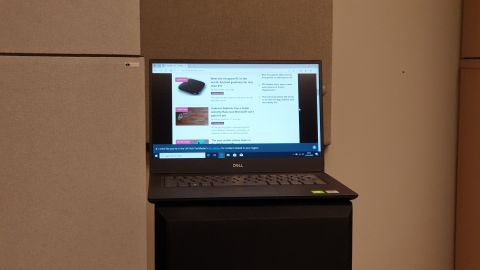 The Dell Vostro 14 5490 business laptop is a capable, beautifully designed and well configured product. However, it does suffer from a chronic mispricing strategy which is not intrinsic to it. It needs to be significantly cheaper by at least 20% to be a viable alternative to other models.

The Vostro range has often been the product range that stays in the shadows at Dell. We rarely get to review a Vostro laptop as reviewers - and their audiences - usually prefer to focus on the XPS or the Latitude range. Vostro however has a very clear place in the business market, where they target the smaller businesses who may see the Latitude range as being too complicated.

At $1,199 at the time of writing, the Dell Vostro 14 5490, is one of the latest additions to the range and aims to capture the imagination of a price sensitive market with a design that’s reminiscent of the award-winning XPS range.

The Vostro 14 5490 has a chassis that reminds us of Dell’s premium sub-brand the XPS series. A gunmetal color scheme (called Ice Gray) gives it an upmarket feel - little details that do have their importance when it comes to perception. Mind you, only the cover uses metal; the rest of the chassis is plastic but smooth and unlike the cheap granular tacky type usually found on entry level models.

A single long hinge connects the display and the base unit. Open the 5490 up and you will find a screen with tiny bezels on three sides - very much like the XPS 13. Designers here have been able to squeeze in a webcam at the top, albeit a redesigned one with a 2.7mm diameter.

The design philosophy is one of simplicity; pushing the screen further back slightly elevates the laptop to facilitate airflow. There’s plenty of air vents, just behind the hinge and under the laptop to keep it cool. Nine screws keep the bottom plate in place and two long rubber strips support the Vostro 14 when on a flat surface.

On the left side of the device, you’ll find a proprietary power plug, an HDMI connector, two USB Type-A 3.1 (Gen. 1) ports as well as a USB Type-C port with DisplayPort capabilities; no Thunderbolt 3 sadly.

On the opposite side are located the RJ-45 connector, a USB Type-A 2.0 port, a headphone jack, and a MicroSD card reader.

As for the dimensions, it is about 18mm thick, 322mm wide, 228mm deep and weighs 1.49kg which makes it pretty compact for a device with a 14-inch display.

Here are the full specs of the Dell Vostro 14 5490 configuration sent to TechRadar Pro for review:

This new Vostro range features the 10th generation Comet Lake Intel range of CPU. The model we tested is the top of the range one with a quad-core Core i7 CPU, 16GB of DDR4 RAM, an Nvidia Geforce MX250 GPU with 2GB dedicated GDDR5 memory, a 512GB Toshiba PCIe NVMe SSD and a 14-inch full HD display.

The memory and the onboard storage are both easily upgradable (although one memory module can be removed, the other one is soldered); the 39.9Whr battery is fed by a 65W brick power adapter with a barrel connector. The lack of TB3 or Type-C option with Power Delivery means that you won’t be able to attach a docking station to it to allow a seamless office experience.

On the other hand, Dell claims that you will be able to charge the battery from dead to 80% in one hour thanks to its ExpressCharge technology. When it comes to connectivity, you get the usual 802.11ac 1x1 WiFi and Bluetooth via an Intel chipset.

Input peripherals on the Vostro 14 5490 won’t set the world on fire; the keyboard has a decent travel but is not mushy enough to our taste (yes, a very subjective measure). It has ample spacing between the keys and is backlit as well. We love the fact that it has separate keys for page up/down.

The touchpad is of a decent size but doesn’t have any physical buttons. It works well without being oversensitive. The display was also equally pleasurable to use.

Here’s how the Dell Vostro 14 5490 performed in our suite of benchmark tests:

As for pure performance, this is one of the fastest business laptops we’ve reviewed to date. Not a surprise given what’s inside. It set record numbers on most of our tests which was expected but the one thing we’re the most surprised about was the exceptionally good battery life on our arduous video test, which at just over seven hours is one of the best we’ve seen.

Of the bundled software, Dell Mobile Connect seems to be the most useful as it allows you to pair your iOS or Android smartphone with your laptop. You can make calls, send texts, get notifications and even mirror your Android phone onto your PC to interact with all your apps. What’s incredible is that this feature is NOT available on the more expensive Latitude laptops.

The other bundled software worth mentioning is a 12-month subscription to McAfee Small Business Security which can be upgraded to a 3-year one for $70.

The fingerprint reader is located in the power button which is actually a very good idea that we’d like to see more elsewhere. What is a shame though is that it is not obvious. Dell says that a new lid-open sensor will turn on your laptop, even when completely off, complementing the power saving features of Windows 10.

This laptop comes with one year hardware service with onsite service after remote diagnosis. It is worth investing in the “4 Year ProSupport Plus with Next Business Day Onsite Service” option which costs $200 extra and includes accidental damage.

In Dell’s world, business and consumer markets do overlap. That explains why the Inspiron 14 5485, which, in theory is a consumer-focused laptop, is sold with Windows 10 Pro. At $792 at the time of writing, it significantly undercuts the Vostro 14 5490. It doesn’t offer the same CPU+GPU combo, swapping Intel and Nvidia for the AMD Ryzen 7 3700U while offering 2-in-1 functionality with a touch screen and a 360 design which will appeal to many.

If you don’t mind a bigger form factor, then the Dell G3 15 3590 is yet another reason why you shouldn’t get the 14 5490. It is cheaper, at $1,049 at the time of writing, and yet packs a far more powerful GPU, the Geforce GTX 1660 Ti with 6GB GDDR6 AND a far more powerful CPU, the hexa-core Intel Core i7-9750H. We are not sure what logic Dell is following by converting a gaming laptop into a business laptop (by shoving in Windows 10 Pro) and slashing its price like there’s no tomorrow.

Other competitors include the Lenovo ThinkPad E490S and the HP Probook 440 G6 range.

Focusing only on the laptop, we can safely say that it is well designed and has all the hallmarks of a mature product. It performs well, has a great battery life, numerous connectivity options, many SMB-friendly features, a dedicated battery life and a superb design plus the comprehensive support options from Dell.

All in all the Vostro 14 5490 is a good workhorse for the target audience. We feel however that it loses out to competition within its own stable, especially if you are ready to opt for a 8GB/256GB combo or a bigger screen. Yet, another example of a product with a poor pricing strategy.